A taekwondo lesson is Seoul is the perfect cure for jetlag and one of the acitivities that will help you immerse yourself in South Korean culture. .

“Kick harder,” shouts Master Lee. I twist my upper body so that my left side is facing him and lash out with my left leg as high and hard as I’m able to. Thwack. My foot makes contact with the punching bag. It sounds impressive. “Again,” he shouts. I kick the bag harder, getting into the groove with a martial arts battle cry, repeating the move six more times. A blast of energy shoots through my body; it’s a vast improvement from the tired jetlagged traveller who stepped off the plane the day before. Even after one hour, the taekwondo lesson has done wonders for my jetlag and fitness. The beginner’s taekwondo lesson at the Gyeonghuigung Palace is run in English each day by a taekwondo master recognised by the World Taekwondo Federation. The 5000-year-old Korean martial art has been Korea’s national martial art since 1971. In the last decade, Korean taekwondo has gone global with an international reputation; the federation has 188 member nations and 70 million people in active training. And the sport was an official event in the Sydney, Athens and Beijing Olympic Games. 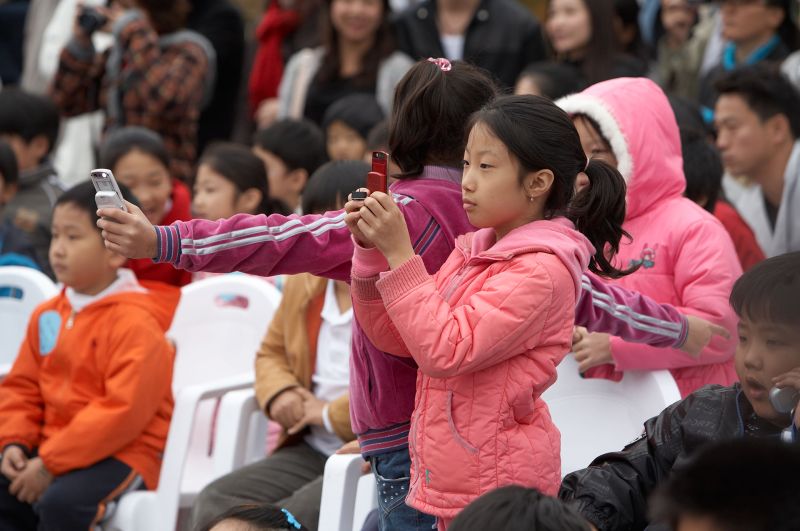 There are plans for a 164.4 billion won 2,314,049-square-meter Taekwondo Park in Seoul with a taekwondo arena, research institute, training institute, exhibition hall and accommodation facilities. At Gyeonghuigung Palace, white martial arts uniforms are provided and students don’t need any prior experience.

Along with three other students from Japan and Hong Kong, I learn the basics in an open-air courtyard. We begin the lesson by learning the correct way of knotting our belts.

Then Master Lee has us on the floor doing stretches. After the warm up, the master puts us through our paces by teaching us routines involving punching, footwork, blocking and kicking. The teaching is done in layers. We repeat a set of moves until he’s satisfied, then we progress to another set of moves. Each set is more difficult than the last. Finally, we practice four sets of moves as one complex sequence.

Throughout the lesson, Master Lee helps each one of us individually by correcting our posture, hand and leg movements. Then a practical combat session follows. My partner is an elderly Japanese man. I reach out and grab him by the jaw, as I’m instructed, and flip him onto ground.

“Be careful. Are you fighting a war?” shouts Master Lee. I soon learn taekwondo has as much to do with the mind as the body. “Be peaceful; synchronize your movements with your mind,” he says. It’s a tough instruction for a beginner to follow through on and I’m unsuccessful. We break for lunch and return to watch a demonstration of black belt students. A large crowd has already gathered in the palace forecourt, drawn by the mesmeric beat of the Korean traditional janggu drum. Musicians in lilac tunics, white pants, yellow, blue and red sashes dance around the courtyard playing an assortment of Korean traditional percussion instruments.

A trumpet blows and the students file onto the floor. The demonstration begins with some of the basic movements taught to us earlier that morning, progressing into a complex sequence of showy demonstrations. Their movements are fluid and impressive, displaying skill levels notches above my own earlier attempts. Then senior students take turns to kick layers of wooden boards with their feet and chop through planks with their bare hands. The crowd is mesmerised as a blindfolded student readies himself to kick an apple held by another student. I hold my breath hoping he doesn’t miss. It’s obvious he’s practiced this move hundreds of times; his foot makes contact and the apple bursts into a million pieces. The crowd cheers. Besides being a superb display of skill, the demonstration is highly entertaining, an hour well spent.

I leave with great intentions of signing up for a taekwondo class back home. It seems like a fantastic way to get fit and lose weight. And you just never know, the fighting skills might come in handy. Updated on January 23, 2020
© Copyright 2020 Travel2Next.com. All rights reserved. This site is a participant in the Amazon Services LLC Associates Program. As an Amazon Associate, we earn from qualifying purchases.
179 Shares
Share
Pin179
Tweet
Email
Flip