Travel by car on the one hour 30-minute drive south of Sydney to the NSW Southern Highlands, and you can prepare for a warm hearty June welcome at the annual Pie Time festival which is a far cry from being a mere pie-in-the-sky event.

While Sydneysiders celebrate the start of winter with a large outdoor light show (see VIVID), the people of Bowral and surrounds are satisfied to greet its guests with all things pies, so much so that they have officially renamed the region the Southern Pielands for the month.

Such were the credentials of The Southern Highlands’ aptly billed Pie Time celebrations, the festival collected a top prize at the Qantas Australian Tourism Awards in the short breaks destination marketing campaign category.

Pie Festival in the Southern Highlands

And the dining experience lived up to its promise, from the time guests milled around the open fire till the last drop of dessert wine.

Last year’s events included another pie and pinot degustation by the bonfire at Tractorless Vineyard, Eling Forest Estate, Sutton Forest, a paddock to pie plate promotion at The Cooks Cooking School, Bowral and a weekend-long festival at Bong Bong Racecourse.

If you’re interested in going this year, take a look at the 2019 calendar of events here.

And with so many pie makers and things to do in the region, it was almost mandatory to host the NSW/ACT Best Pie Competition, judged in five categories and, yes, all pies on sale for a taste test.

To create such a festival feast was certainly food for thought for the judges.

Despite the special attention to June’s Pie Time festival, the region’s array of delicious pies can be bought and happily consumed all-year-round.

And what better way to sample the delicacies than to drive, take a tour on a trike, or even cycle on a pie trail which can lead you to more than 30 bakeries, cafes, restaurants and, in some cases, cooking classes and demonstrations.

Berrima’s Stones Patisserie has a signature “heads and tails pie’, the Glass Café at Mittagong has a Peruvian Alpaca pie, famous Heatherbrae’s at Sutton Forest has its share of award-winning pastries while Falls Café at Fitzroy Falls has a “Banga and Curry Pie”.

And for those who visited the Artemis Vineyard and its rustic cellar door near Mittagong there was the opportunity to dine on its signature pies – Asian duck and pinot pie and rabbit, mustard and amber ale pie – while sampling the winery’s pinot grigio and pinot noir labels.

Artemis is also renowned for its Sunshack and Bee Mead ciders and Jake’s Brew graft beer.

If you enjoy visiting the Southern Highlands, you might also like to visit Goulburn (Australia’s first inland city) and the country town of Crookwell.

With a name like Gumnut Patisserie, the pies couldn’t be more Aussie than they get in the NSW Southern Highlands.

However, if you scan down the blackboard of the variety of gourmet pies on sale, you’d think otherwise. One to mind is the Massaman Beef Curry, a tasty addition, set for fame at this year’s Pie Time awards.

In 2017, the Mittagong-based bakery with outlets at Bowral and Berrima took a major prize for its port and beer-inspired Eden Pie, the creation a collaboration with neighbouring Eden Brewery.

Visit on a weekend and don’t be surprised to find lengthy queues waiting to order their favourite pies and desserts.

As a Pie Time celebration, the Mittagong bakery decided to serve a special high-tea which comprises “all things Pies for Pie Time” – three tiers of Gumnut goodies, including the award-winning Mini Eden Pie, mini lamb and rosemary pie and a mini plain meat pie, quintessentially Australian.

In a corner of the café, sitting alongside a series of trophies won by the patisserie is one of Australian writer’s May Gibbs’ gumnut babies.

Decorating another wall are photographs of the many youthful apprentices to make up a Wall of Fame – certain to become as famous as the pies themselves.

Take the short drive from Bowral to the stately home and gardens of Retford Park and you have a great chance to walk off lunch or perhaps build up an appetite for the next pie adventure.

Don’t expect to see a pie here, but if you are hungry, the volunteers will have the great pleasure to serve some homemade pumpkin soup, perfect on a chilly winter’s day.

Built in 1887 by retail merchant and stockbreeder Samuel Hordern in 1887, the grand rendered brick Italianate-style house stands prominently amidst magnificent gardens, having been in the meticulous care of newspaper magnate James Fairfax from 1964.

In 2016, Mr Fairfax gifted his historic salmon-coloured country home to the National Trust of Australia with the trust taking over officially the following year.

Fronting the eastern side of the homestead is a patchwork of hedged gardens highlighting almost everything from a detailed knot garden to an attractive swimming pool and pavilion dating back to the 1960s.

Sculptures of dogs, much loved by Mr. Fairfax, command the home’s front entrance. Expect to see a few feathered friends on a walk around the gardens – five resident emus.

For the record, the gardens are open on the first weekend of each month ($15 an adult, National Trust members free), while a visit of the stately home is by appointment only.

Heading south from Sydney? NSW’s coastal attractions are delightful to explore. Here are some things to do in Kiama and Wollongong.

The Pie Time craze has reached the cricketing circles with the Bradman Café at Bowral’s Bradman Museum (The International Cricket Hall of Fame) creating a perfect pie to accompany the morning or afternoon tea or coffee.

In doing so, the café has named the dessert in honour of the greatest-ever Australian batsman’s uncles, George and Dick Whatman, who lived and played cricket in the Southern Highlands.

It’s well documented that, as a teenager, Sir Donald Bradman cut his teeth by playing in the same Bowral senior team as his uncles, so it seemed appropriate that the café’s chef Rachel Powers would create a Sweet Whatman Pie.

The pie is as tasty as it is described on the menu board – Sweet apple and raspberry frangipani pie served warmed, garnished with Granny Smith apples, bursting with regional raspberries, and dusted in cinnamon sugar. Accompanied by cool mint ice cream, mint leaf and drizzled in a raspberry coulis.

It’s the perfect meal either before or after walking through the informative, entertaining and, to the children’s delight, hands-on museum.

Anyone for Sheep’s Head Pie?

Yes, it was well noted that in the 1930s during the Great Depression, the list of family pies included a Sheep’s Head Pie, along with Rabbit Pie and even a Half Pay Pie for those who couldn’t afford all the ingredients.

Take the 10-minute drive from Bowral to the historic village of Berrima, and you can learn about the early days of pie making on a visit to the fascinating Berrima District Museum.

The Southern Highlands right through to the Southern Tablelands is good sheep country.

Just stop along the highway at Goulburn, NSW, where the Big Sheep is an Aussie landmark that reminds you of this.

Sitting in pride of place in one of the museum’s showrooms is a glassed cabinet featuring the various utensils needed to make the perfect pie in the early 20th Century, along with a small number of donated cookbooks.

It’s here from a 1933 book that we learn about the Sheep’s Head Pie, which included thyme and grated carrot as well as the sheep’s brains.

The instructions began so eloquently: “Take a sheep’s head, clean nicely, place in a saucepan with enough water to cover it.”

Of course, there were other more pleasant-sounding recipes – Veal and Ham Pie, Veal and Sausage Pie, Lemon Pie and even Rabbit Pie which is again popular in the NSW Southern Highlands.

The popular museum doesn’t just focus on pies as there are many other displays devoted to the region’s early years, including an informative and educational display on how German sea merchants came to be “imprisoned” at an internment camp in Berrima during the breakout of World War I.

The men certainly lived life to the fullest as shown in the many stories and displayed photographs.

Looking for more places to visit in NSW? Port Stephens is a small town with a big harbour, six times the size of Sydney’s. It’s a wonderfully scenic spot and you’d be surprised at how much there is to do in Port Stephens. Newcastle is a city on the rise. Here are some things to do in Newcastle.

Where to stay in the Southern Highlands

For a taste of accommodation in Bowral and perched on a rise overlooking a private nine-hole golf course is historic Peppers Craigieburn, a hot spot for wedding receptions and conferences as well as weekend escapes.

The original main building with its wide veranda retains the elegance from bygone days, albeit with all the mod cons of the 21st Century, wifi access included.

Many of the guest rooms overlook the 36-hectare garden estate while the spacious guest lounges with their open fires provide a warm welcome on a brisk winter’s day.

The Hickory’s Restaurant and Bar has been modernised over the years, so too the menu and its contemporary Australian cuisine.

And, yes, the hotel has an afternoon high tea which includes pastries of the pie variety.

Compare prices for accommodation in the Southern Highlands here 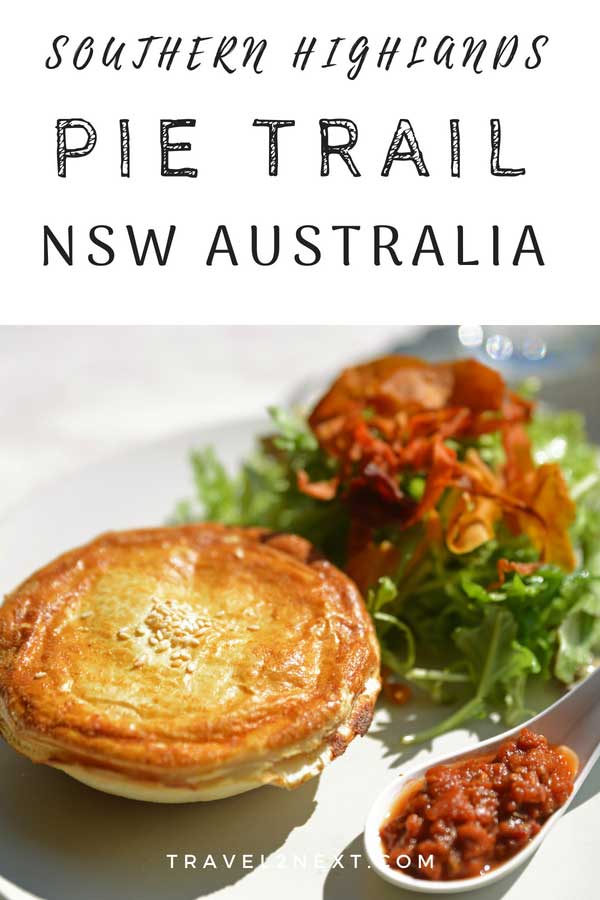