Beautiful beaches, UNESCO World Heritage sites and lush national parks make Sri Lanka a fantastic destination to visit. A Sri Lanka road trip is a feast for the eyes, with roads that sweep past waterfalls, tea plantations and ancient temples. With such rich pickings, 10 days in Sri Lanka is only just enough to give you a taste of what Sri Lanka offers.

For a small tropical island, Sri Lanka punches way above its weight when it comes to UNESCO World Heritage Sites and with affordable prices, there’s every reason to start planning your Sri Lanka itinerary for 10 days now.

With so many interesting places to visit in Sri Lanka, it’s hard to decide where to spend your time, so here’s an itinerary I enjoyed thoroughly and I think you will enjoy it too.

If you’re planning on exploring Sri Lanka’s Cultural Triangle, the best time to visit is between January and March, when it’s dry and warm enough to explore the elevated altitudes of the northern plains.

Of course, you don’t mind walking around in the rain or on a humid day, you can visit anytime.

If you’re planning on climbing Sigiriya (everyone should try it!), avoid the monsoon season (the months before January) and after March, when temperatures can soar to the mid-30C. Check out the weather in Sri Lanka here.

Other Itineraries you will love:

35km north of Colombo, Negombo was a hub for the cinnamon trade during the Dutch era.

It’s a great place to start a Sri Lanka itinerary, as Negombo is a small historic city with a relaxed atmosphere.

There’s a strong Dutch influence in Negombo’s architecture and Negombo is an excellent place to brush up on Portuguese, Dutch and British history.

The first day of a Sri Lanka itinerary should always be a bit cruisy to give you a chance to adjust to the time zone and recover from jetlag.

Things to do in Negombo

Check out these Negombo tours.

Where to stay in Negombo

Jetwing Lagoon, Negombo, is a luxurious hotel in a great location between the Indian Ocean and lagoon. Ask for a room with a view of the lagoon and relax in luxury before your embarking on your Sri Lanka itinerary.

Depart Negombo early in the morning for Sigiriya, travelling north into the Sri Lankan highlands, but before leaving Negombo, stop at the Negombo fish market to catch a bit of local market action.

As Sigiriya is a central point to many of the sights in Sri Lanka’s cultural triangle, it’s an excellent place to use as a base.

On the way to Sigiriya, spend at least a couple of hours at the Golden Temple of Dambulla.

Even if you’re not into caves, you won’t want to miss this as this 3rd-century cave monastery with its five caves of Buddhist mural paintings and 157 statues is impressive.

The caves were refurbished in the 18th century in the Kandy school of art style and the colonial facia and veranda were built in the 1930s.

Don’t miss the Maharaja Vihara Lena (Cave of the Great Kings), which has statues of two great Sri Lankan kings, King Valagambahu and King Nissankamalla as well as an enormous statue of a reclining Buddha.

Driving time between Negombo and Dambulla: 3 hours 20 minutes (Sigiriya is about 30 minutes from Dambulla)

Where to stay in Sigiriya

Staying in Sigiriya for four nights will give you a chance to unpack and sleep in a familiar bed for a few days. From Sigiriya, you can do day trips to the ancient capitals.

Sigiriya Village is a sprawling complex that has the lovely backdrop of majestic Sigiriya Rock. Pathways meander past lotus ponds and connect the chalets with the central resort area. There’s a large swimming pool and restaurant the serves up traditional Sri Lankan food.

Compare prices of hotels in Sigiriya.

Anuradhapura was Sri Lanka’s third capital and of all the ancient kingdoms, this is the one not to miss even if you’re on a Sri Lanka 5 Day itinerary or shorter.

The sacred Buddhist city is one of the oldest continuously inhabited cities in the world.

Anuradhapura’s days of glory lasted from 377BC to the 12th century AD but the city itself is much older than that (possibly dating as far back as the 10th century BC!).

It’s incredible to think that this once-important city with its 60m bell-shaped stupas lay in ruins for centuries, forgotten until the 19th century.

These stupas are as impressive as the Egyptian pyramids and filled with Buddhist relics.

Things to do in Anuradhapura

On the way back from Anuradhapura, if you fancy a green change and a forest walk, stop at the Ritigala Medicinal Forest.

It’s a good hike through the forest to the ruins of an ancient Buddhist Monastery, which does require a bit of the imagination to picture bridges, courtyards and platforms.

Polonnaruwa was the centre of power on the island during in the 11th and 12th centuries.

What sets Polonnaruwa apart from the other ancient kingdoms is the technology the rulers employed to build this kingdom’s irrigation systems, which were vastly superior to those during the Anuradhapura era.

Shrines and stupas were constructed from brick and temples were built for Hindu gods.

Alas, Polonnaruwa’s golden age was short-lived when an invasion from a Southern Indian army began to drive the political centre towards the centre of the country.

Things to do in Polonnaruwa

An option in the afternoon is to go on a short safari in Minneriya National Park to see elephants and sambar deer.

Once a palace built on top of an enormous 200m-high rock, Sigiriya is a UNESCO World Heritage site that is commonly known as Lion Rock.

The palace ruins on the plateau, with its swimming pool ruins and throne, are awesome.

In the 5th century, King Kasyapa built his palace on top of this lava plug left over from an ancient volcano.

The bad news is there are 750 steps to climb to the summit is quite an effort but it’s worth taking your time to climb up the staircases just to see the view from the plateau.

The frescoes of a bevy of bare-breasted maidens are particularly arresting and well preserved.

You can access them via a metal corkscrew staircase near the top.  According to the legend, 500 women were assembled by King Kashyapa for his entertainment and parties.

Things to do in Sigiriya

Compare prices of hotels in Sigiriya.

Another sacred Buddhist city, Kandy, is the former capital of Ceylon and the last capital of the Sinhalese kings.

The city is best known for its famous Temple of the Sacred Tooth, which is home to Sri Lanka’s most important Buddhist relic – Buddha’s tooth.

So if possible, try to plan your visit to Kandy to coincide with the Tooth Festival as this is one of the largest celebrations in the country.

During the festival elephants are decorated with embroidered coverlets there are parties, fire walking and other festivities.

When visiting Kandy, things to do besides visiting the temple involve exploring nature and delving deeper into the local culture.

If you can spare a few extra days, Kandy is a good place to stay longer.

Things to do in Kandy

Compare prices of hotels in Kandy.

Sri Lanka’s railway was constructed by the British in 1864 to transport tea and coffee from the hill stations to Colombo.

Nuwara Eliya was the hill station where the British went to escape from the steamy temperatures.

The rail route to Nuwara Eliya is a scenic journey where the landscape gradually changes from spice and banana plantations to pine and eucalyptus forests.

Either travel from Peradeniya railway station or (if tickets are not available) from Gampola station.

Sit on the left and gaze out the window as the train rolls past tea plantations.

Nanu Oya station is a 15-minute drive to Nuwara Eliya.

Train tickets can only be purchased in advance and seats cannot be guaranteed.

Visit a tea plantation to learn about Sri Lanka’s most famous export. Of course, we’ll enjoy a cup while we’re there.

As soon as you arrive at Nuwara Eliya, you’ll see the British influence in its mock-Tudor houses with whitewashed walls and rose gardens, golf course, race track and botanical gardens.

Travelling south towards the coast, you’ll pass Ella (which has quite a lovely waterfall) to arrive in Tissamaharama (or Tissa) – the gateway to Yala National Park.

Yala National Park is the oldest and most famous national park in Sri Lanka.

The park is home to elephants, wild buffalo, deer, black bears, macaques and jackals but most people go to see leopards.

There’s a range of habitats, from scrub jungle to brackish lagoons, lakes and rivers. And it also has ruins from long-gone civilisations.

Galle is a Dutch colonial town of Galle that deserves a few days but a half-day tour around the city is enough to give you an overview of its UNESCO World Heritage-listed sea fortress.

Enjoy the afternoon at leisure and travel straight through to Colombo but if you can spare another day or two, check into one of these hotels in Galle.

Make your way to the island nation’s capital, Colombo, where it’s worth taking a guided tour of the city.

Rich in colonial heritage, Colombo is Sri Lanka’s capital and a vibrant city to explore.

If there’s one place not to miss, that would be the Gangarama Vihara temple for its amazing brass work, stone carvings, Buddhist art and museum.

Things to do in Colombo

Compare prices of hotels in Colombo.

Looking for more? Check out these itinerary ideas:

The Sri Lanka video in this post was created by InVideo. 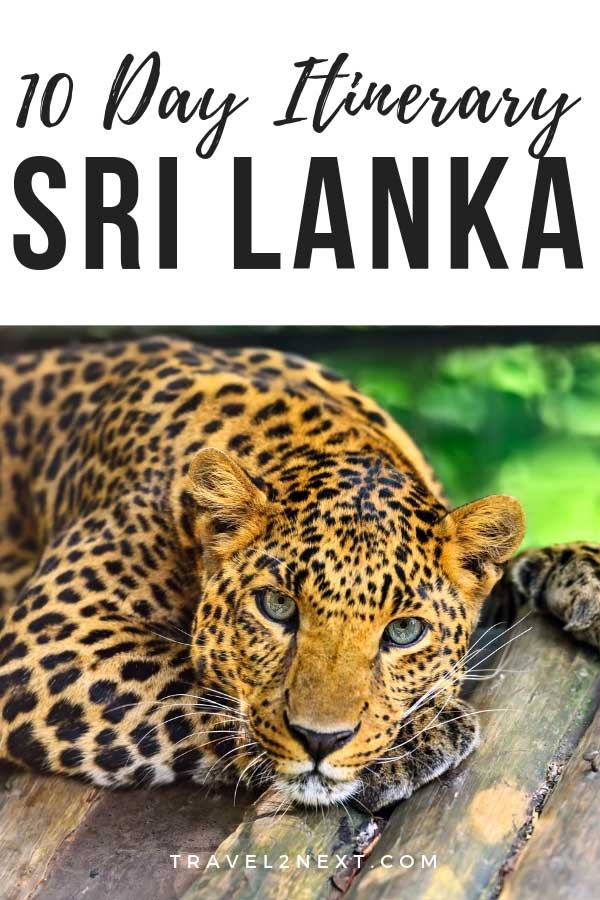