The raw power of Mother Nature is my constant companion while visiting the Bungle Bungles in Purnululu National Park in Western Australia.

An adventure by airplane to the Bungle Bungles takes me over Lake Argyle to the fascinating geological formation known as “The Beehives”, where I discover a lost world in West Australia’s Kimberley that will remain in my memory forever.

The Bungle Bungles is truly one of the most impressive Australian landmarks to see.

The flight to Purnululu National Park

Flying above Lake Argyle, from my window in the eight-seat GA8 Airvan, I gaze at the lake and its myriad of islands.

A boat slices across the blue-green water leaving a long rippled ribbon on the lake’s surface.

The pilot’s voice crackles through my headset telling me that during the wet season Lake Argyle can swell to 40 times the size of Sydney Harbour.

Soon the water view is replaced by an endless landscape of farmland.

The pilot’s commentary includes information about stations like Texas Downs, named for the resemblance of its boundary to the USA state, Alice Downs, Mable Downs and the 161,000-hectare Lissadell Station.

Although the Kimberley region is not quite as big as Texas, it does have the largest cattle herd in Western Australia (around 500,000 head at last count).

Besides cattle grazing and tourism, mining is the area’s other cash cow. And our return flight gives us a chance to fly past the Argyle Diamond Mine where one-quarter of the world’s diamonds are mined.

Our flight is the first leg of a day-tour to the Bungle Bungle Ranges to see its spectacular beehive dome-shaped sandstone towers and breathtaking gorges.

Our destination is the remote World Heritage-listed Purnululu National Park.

Pernululu National Park is in the Kimberley region and close to Kununurra.

Beehives of the Bungle Bungles

The 360-million-year-old ranges came to the world’s attention in 1983 when a Perth film crew produced a documentary that became an international hit.

The beehive formations were featured in a well-known Qantas advertising campaign I Still Call Australia Home. where 180 children are filmed running joyfully through Cathedral Gorge and along Piccaninny Creek.

Do you remember the spectacular aerial shot of the Bungle Bungle Ranges in the opening scene?

As we fly above Purnululu National Park, I’m mesmerised by the swirling patterns formed by the structures below.

At the Bellburn Airstrip, a guide is waiting.

We pile into a bus, which rolls past rocks the shape of elephants, Fred Flintstone and Yogi Bear.

Yes, if you look hard enough in the Kimberley, your imagination sees many shapes.

The management of the park is a joint partnership between the traditional owners and the State Government’s conservation agency, the Department of Environment and Conservation (D.E.C).

Purnululu National Park has a spiritual significance to its Aboriginal inhabitants, who have lived in the region for 20000 years.

What are the Bungle Bungles?

The name Bungle Bungle is believed to have originated either from an Aboriginal name for the area or from a misspelling of the bundle bundle grass commonly found here.

The Bungle Bungle Ranges were formed by the consolidation of sand grains and conglomerates composed of pebbles and boulders.

These sedimentary formations were deposited into the Ord Basin around 360 million years ago when active faults were altering the landscape.

Its most striking feature is the near-vertical cliffs and steep-sided banded beehive-like rock formations.

The beehives are a result of 20 million years of geological processes and landscape evolution and composed of extremely fragile sandstone.

Dark grey bands, which turn black after it rains, wind horizontally around the domes.

These bands are formed by cyanobacteria (or blue-green algae) and are a striking contrast to the rusty orange bands which have a protective coating of iron oxide.

At the Piccaninny Creek car park, we continue our journey on foot.

The striped domes loom large before us. We walk pass termite mounds and clumps of wispy spinifex; we climb over rock ledges and down a metal staircase into an eroded pothole.

The scenery is picture perfect.

The grandeur of the landscape makes me feel small and insignificant.

We stop at the rocky area where the final scene of the Qantas commercial was filmed.

Then we follow the dry creek bed into the almost-acoustically perfect Cathedral Gorge, a natural amphitheater carved out of the sandstone dome walls.

Here, we stop for lunch and cool our feet in the gorge’s chilled water.

Besides its beehive-like structures, the park is a haven for wildlife with more than 130 bird species including quails, spinifex pigeons, rainbow bee-eaters and the endangered grey falcon (Falco Hypoleucos) which is listed by CITES (Convention on International Trade in Endangered Species) as a vulnerable bird.

Back at the airstrip, the helicopters are waiting.

Strapped into the seat of a helicopter and hovering like a giant dragonfly above the domes is an experience not to be missed.

Below us, the hikers are tiny moving dots in the majestic landscape.

The scenery from the ground may be overwhelming but the view from the air is jaw-dropping.

All four doors on the helicopter have been removed so that each passenger has a birds-eye view.

We fly over chasms and cliffs, rock pools, valleys and magnificent sunset lookouts.

There are stunning boulder-filled gorges growing with lush clusters of Livistona palms.

The chopper tilts sideways and I hang on to my seat awe-struck by one of Mother Nature’s finest works.

How to get to Purnululu National Park Qantas (codeshare Airnorth) and SkyWest flies to Kununurra from Perth, Broome and Darwin. Tours to the Bungle Bungles leave from Broome by air or, if you have the time, you can drive to Purnululu National Park.

Where to stay in the Bungle Bungles

The filming of the Qantas commercial in Purnululu National Park involved 22 chaperones, 2 nurses, a doctor and 2 medics, a safety officer and 49 crew members, 180 umbrellas, 240 torches, 120 bottles of insect repellent, 220 water aluminium bottles, 15 litres of sunscreen and 200 string eco bags were provided to the children.

Looking for more to do in Western Australia? 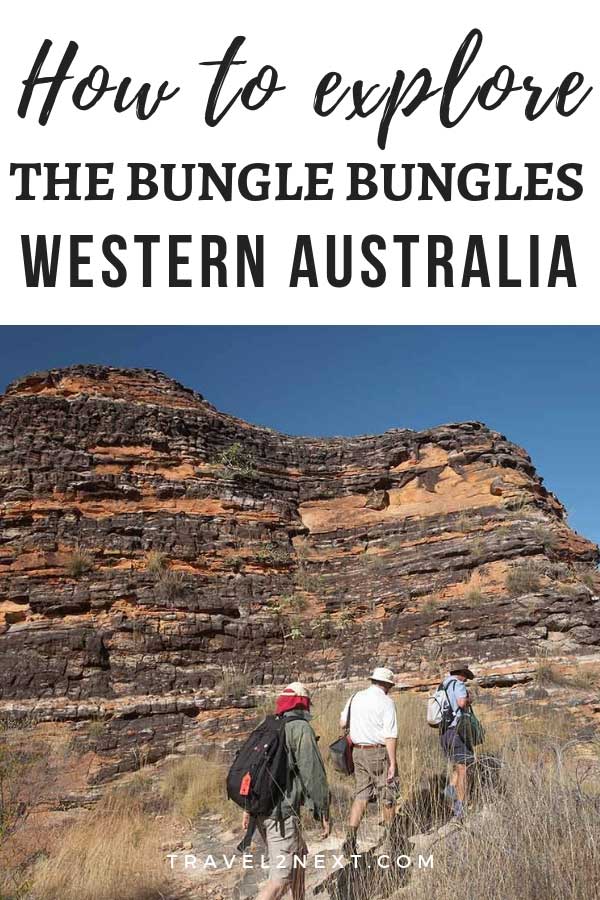