A visit to India lures Maria Visconti to the Golden Temple Amritsar.

I am back in the Punjab drawn by a desire to get under the skin of this legendary place. With heart beating in anticipation I set foot on the Amritsar train station platform and follow a turbaned fellow passenger who -at my request- will negotiate a taxi ride to my hotel. He picks the best bet, gives me the thumbs up and goes on his way.

One of the earliest pieces of travel advice I was given years ago was: ‘If you ever need help in a foreign town, look for a turban’.

My friend was referring to the Sikhs and while his advice was correct (Sikhs have had for centuries a chivalrous reputation) it hadn’t been all that easy to locate one in the past.

However, this is Amritsar (translating as Pool of Nectar) where a whooping 79% of the population are Sikhs. There is no shortage of turbans here… My search has been inspired by wondrous tales of a pool of nectar on which a floating golden mirage shimmers; larger than life Gurus; warrior saints; a ‘living’ Holy book whose stanzas are sung in harmonious tones; epic battles; chivalrous acts of heroism; catastrophic massacres and unbelievable suffering. Physically getting to the pool of nectar is not going to be easy though. The old town streets are narrow and winding (specifically designed in the 16th-century to confuse invaders) and the main thoroughfare leading to the temple is in a continuous, unstoppable flow. There are no traffic lights in the Old Town.

One thing immediately obvious, as I pick my way through the tide of traffic, is that there are no beggars and no harassment from rickshaw drivers.

There are no ‘come and visit my shop’ invitations and you are free to move at will. As a woman travelling alone in India, this is a welcome reprieve. I have chosen a hotel within the Old City, walking distance from all the must sees in this town. The Golden Temple Amritsar is at the top of my list. A rival to the Taj Mahal in tourism terms, the Golden Temple attracts an average of 100,000 visitors per day. In a few minutes I am in a giant, marble courtyard isolated from the outside noise. Past a footbath and down a steep flight of stairs, a shimmering vision appears before my eyes: late afternoon sun shines on the holy sarovar (pool) through some dramatic clouds. Gold flashes explode from the main sanctuary, which truly seems to float on the water.

The canopied walk connecting it to land is full of people coursing slowly to pay homage to the Guru Granth Sahib, the 11th and last Guru of the Sikhs, which in fact is a book, a compilation of all the teachings of the previous ten Gurus.

I walk the parikrama (clockwise circumnavigation) and get sucked into a cosmic vibe transported by the melodic ragas suffusing the air.

There are people from all faiths, all feeling the same peace. It is hard to imagine that Operation Blue Star took place here on June 3rd, 1984 when the Indian Army stormed the Golden Temple to flush out Sikh separatists taking refuge here.

On a full moon night the white marble parikrama was illuminated like a shooting gallery and hundreds of innocent worshippers were left dead. Today, all I see is devotion. The fact that this temple is not built on higher ground as most religious buildings are (from Medieval Christian Cathedrals to Grand Mosques), signals one of the basic principles of the Gurus: equality for all regardless of caste or religion found at grass roots level.

Even Moghul Emperor Akbar the Great –an open-minded ruler appreciative of all other faiths- is said to have graciously accepted the Gurus’ rule that a meal at the Temple’s Langar (communal eating hall) is to be consumed sitting on the ground levelled with everyone else.

Sikhs worship one God, have no prescribed rites or idols and do not use candles or incense: “Let sun and moon be earthen lamps and orbs of stars be like rubies” the Gurus said. On these blindingly white expanses of marble, there is a presence hard to ignore: clusters of men clad in electric blue tunics with yellow sashes and towering blue turbans: the Nihang Sikh, who traditionally carried swords and wore bracelets of iron around their wrists and quoits of steel around their neck and turbans.

These were not just ornaments, but deadly weapons. The chakram (the metal quoits/rings) have a smooth interior and a sharp edge on the exterior. When spun around a finger and let go they can cut up the enemy to shreds. 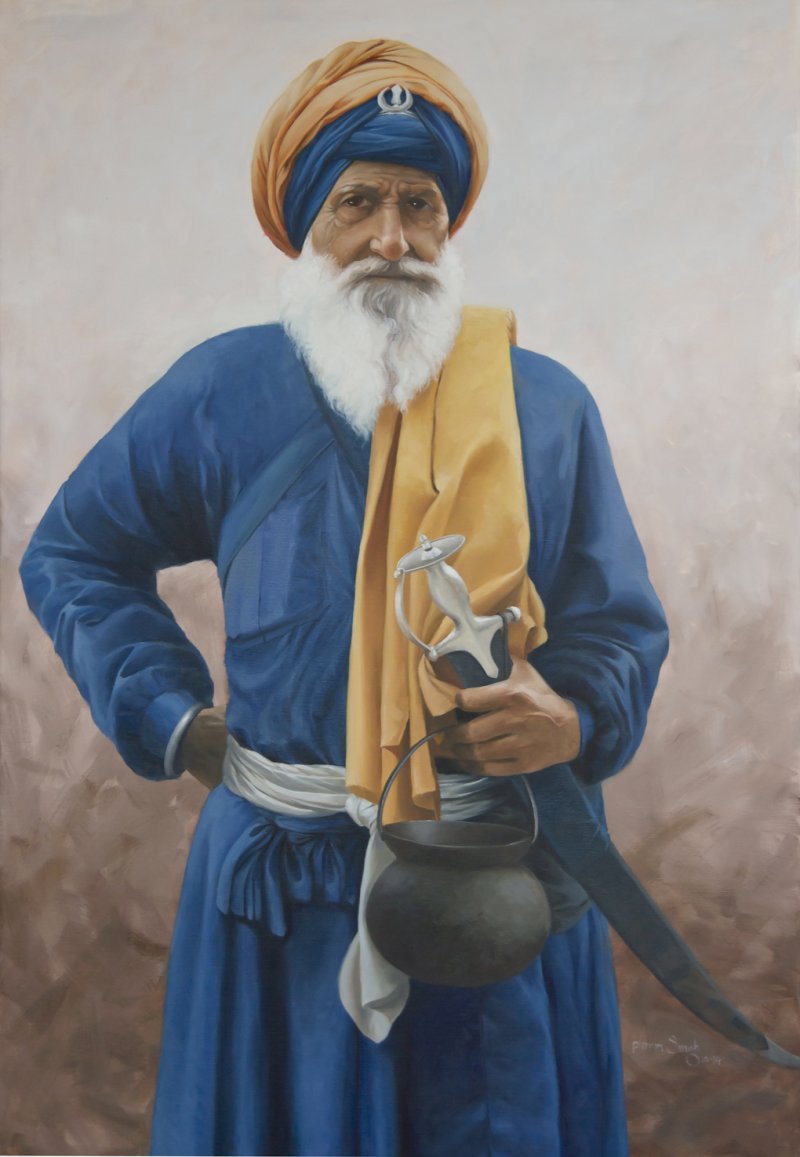 On sighting these men in blue, one exchange between Nadir Shah (conqueror and plunderer of India in the 18th-century) and the Governor of Lahore comes to my mind. Upon suffering great losses to Sikh guerrilla squadrons swarming his camp at night, losing precious booty and hundreds of captive women and children destined to a life of slavery in Persia, Nadir Shah asks: ‘Who are these long haired barbarians who dare attack me?’

The reply comes: ‘They are a band of fakirs (holy men) who visit their Guru’s tank twice a year, and, after bathing in it, disappear.’ Nadir Shah persists: ‘But where do they live?’. ‘Their homes are the saddles on their horses,’ was the reply. In times of peace the Akali (another term for the Nihang) wear miniatures of their weapons on their turbans and revert to their traditional occupation, which is farming and rearing the beautifully nimble Marwari horses that served them so well in past campaigns.

Today, state of the art tractors have replaced their legendary horses in everyday life making these farmer-warriors the face of rural Punjab, the breadbasket of India. I next need to discover the other sites of Amritsar, but that is another story…Watch this space.

The writer travelled to Amristar at her own expense.

Parminder Singh is a Punjabi artist born in 1985. He always had a passion for art. After completing a Diploma in Arts and Crafts and his Masters in Punjabi, he decided to pursue his passion of painting professionally. He finds himself to be heavily influenced by religious philosophy, tradition and nature. His work has been reproduced here with his consent.

While in India, do stay in one of the former Maharajah’s palaces. It’s a luxurious experience that you’ll always remember. There are many palaces that have been turned into upmarket resorts throughout India. Some of the best palace hotels are in Rajasthan.

Another fabulous experience in India is to pay a visit to the Ajanta Caves. Check out this post about a talented Pujabi chef who is making waves in the luxury hotel scene.

Try these top these Kolkata attractions and other places to visit near Kolkata.