Fairytale princes, luxurious palace hotels, colourful markets and a monkey kingdom are some of the exciting sights in Rajasthan’s blue city. Here are 10 places to visit in Jodhpur. Built in the 15th century by the Rathore Rajputs – who claimed to be descendants of the Ramanaya hero Rama – Mehrangarh Fort rises from a sandstone hill to keep watch over Rajasthan’s blue city. With staff dressed in traditional Rajput costumes, traditional music playing in the background and rooms full of Rajput memorabilia, the atmosphere is enthralling.

You can easily picture sword-brandishing warrior princes chasing beautiful princesses around the marble corridors as the palace staff bustle about their daily chores. Today, the fort is managed as a museum by the Mehrangarh Museum Trust (tel: +91 2912548790) and is a spectacular sight, well worth a visit.

Wander through the Jhanki Mahal where the Zenana women once watch ceremonial events while hidden behind screens, the Chandan Mahal where affairs of state were discussed, the royal Darbar Takhat or throne room with its octagonal throne and the Rang Mahal where the Maharaja used to throw water around during the Holi with his Zenana. 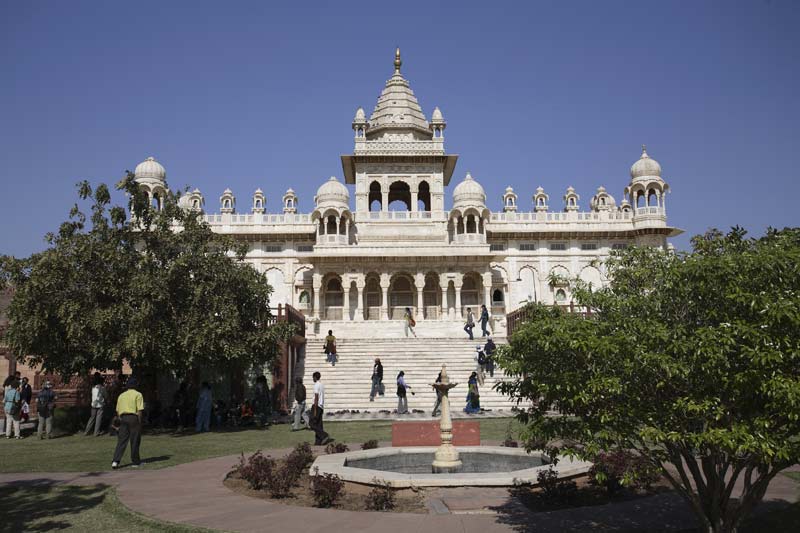 Half way up the road that climbs towards the fort, is the Jaswant Thada, the traditional cremation ground of the rulers of Jodhpur. Set among neat gardens is an elaborate white marble memorial built in 1899 in honour of Jaswant Singh II, the Maharaja during that time. Inside the main hall, there are portraits and other possessions belonging to the rulers of Jodhpur. 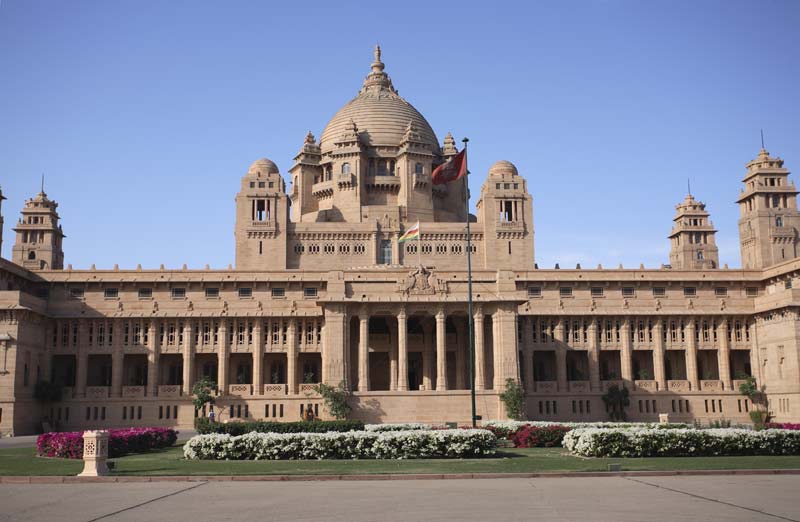 Umaid Bhawan is a 347-room sandstone palace that graces Jodhpur’s horizon with a fairytale setting. Set in beautifully manicured gardens, this well-known landmark can be seen from all over the city. Designed by the president of the British Royal Institute of Architects for Maharaja Umaid Singh, the palace was completed in 1943 after 15 years of construction.

Maharaja Umaid Singh died not long after his dream palace became reality and soon after, India became an independent nation and the extravagances of the Maharajas were memories of the past. The current descendent of the Maharaja, Gaj Singh II, still lives in one section of the palace, a museum occupies another part, while the rest of the palace has been converted into a luxurious five star hotel.

The museum is worth a look, as it has displays of pictures, swords and other paraphernalia once used by the royals. Stay in the hotel (tel: +91 2912510101, email: ubpresv.jodh@tajhotels.com) and soak in the ambience of this magnificent home of the Rajput rulers. You can even sleep in the Maharani Suite which was once lived in by the Maharani, and maintained in its original pink and black art-deco design. Wander through the gardens and temples of Mandore, the ancient capital of Marwar and seat of power before the rulers of the area built Mehrangarh Fort. Mandore was founded in the 6th century and passed to the Rathore Rajputs in 1381 after a marriage alliance between a princess of the original founders, the Pratiharas, and the Rathore Maharaja, Rao Chandor.

Today, Mandore is a monkey kingdom. Buy a bag of peanuts from the peanut seller at the gate and groups of Langur monkeys will provide you with an enthusiastic reception. During Jodhpur’s wedding season in November, follow the colourful wedding processions past rock terraces to the Hall of Heroes where gigantic figures of Hindu deities and local heroes are carved out of a single rock wall. Set among the rocks are the imposing royal cenotaphs of the Maharajas. Jostle your way through the crowds of the Sadar Market, a colourful and hectic bazaar that epitomises life in Rajasthan. Its narrow lanes are lined with shops selling textiles, embroidered shoes, multi-coloured turbans and jewellery. Held over 15 days, around July or August each year, the women of Rajasthan pray to the goddess Parvati for good husbands and marital bliss. During the Gangaur Festival, colourful wooden images of the goddess are worshipped in each home, while a large image of the goddess is paraded through the streets of Jodhpur. Ladies decorate their palms and feet with drawings of the sun, moon, stars and flowers using henna. With such a rich history, it is no surprise that Jodhpur specialises in antiques and Umaid Bhawan Palace Road is one street where you will find lots of antique shops. Browse for door knobs, glass bottles and antique statues. You’ll also find carpets of every shape and design, dusty brass genie lamps and musical instruments. There are usually no prices on any of the items, so bargain hard and shop around. Visit surrounding villages by jeep and immerse yourself in the local way of life where you can try your hand at making pots, grinding grain and firing slingshots. These trips also provide good opportunities to buy rugs and handicrafts. Settlements of the Bishnoi tribe – who consider it a great pride to be able to die saving trees or animals – can be seen in the villages.

Bishnoi carpenters wait for trees to die of their own accord, they never cut them down. Every Bishnoi family creates a water tank in their field to provide drinking water for animals during the dry summer months. Even though deer herds eat their crop, no Bishnoi will ever chase a deer away. Once a busy trading centre, 65km from Jodhpur, Osian’s 16 beautifully sculpted Hindu and Jain temples date back to the 8th century. Colourful frescoes tell stories about the life and childhood feats of the Hindu deity Lord Krishna, while carved pillars display images of Durga, Surya and Ganesh.

The largest is the Mahavir Jain temple, dedicated to Mahavira the last of the Jain thirthankars or gurus. You can stay in a tent at Camp Thar and head off into the desert on a camel safari. Rajasthan’s dances make the Thar Desert one of the most colourful in the world. Among the dances are the Ghoomar, which is a simple and graceful community dance for women while the Gait Ghoomar is performed during the Holi festival by both men and women. The Chari is danced with pots on the head and a lighted lamp.

There’s the Kachhi-Ghodi where men in elaborate costumes ride well-decorated dummy horses, the Kathputli puppet dance and a fire dance where Jasnathi tribe men jump on to fire in a trance to the accompaniment of drum beats.

Christina Pfeiffer was a guest of Incredible India

Want to know the best places to visit in Kolkata?