If you’re planning to spend a few days, here’s the perfect 4 Day San Francisco itinerary for you. San Francisco has several of California’s famous landmarks.

Romantic things to do in San Francisco during the day 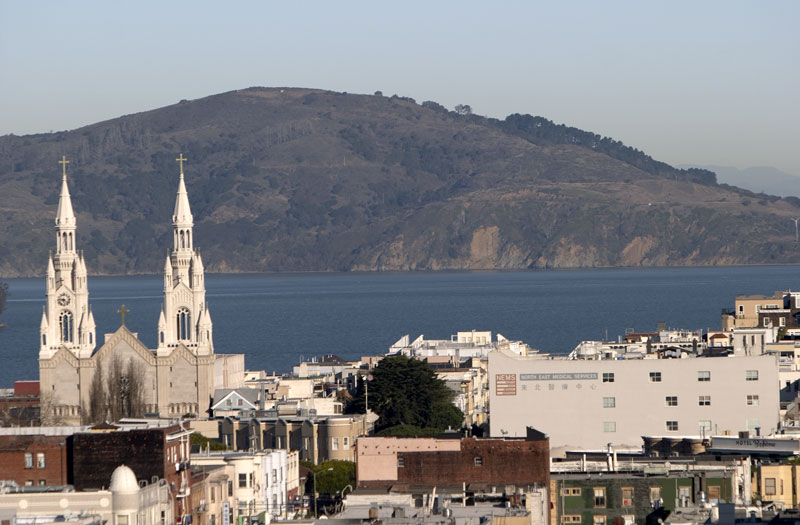 1- Find a view of the Golden Gate Bridge

As the Golden Gate Bridge is an icon that everyone recognises, one of the romantic things to do in San Francisco is to photograph the bridge from different viewing points.

If you’re visiting San Franciso and haven’t snapped a photo of the two of you with the iconic bridge in the background, there are several spots you’ll want to check out.

Battery Spencer has a great view from the northern end while other good spots are the Golden Gate Visitor’s Centre, Marin Headlands and Marshall Beach.

Here are more beautiful viewpoints in San Francisco to help you fill up your Instagram feed.

There’s no doubt one of the romantic things to do in San Francisco is to ride the cable car to Nob Hill and wander around San Francisco’s poshest neighbourhood.

When cable cars made the hilltop accessible in the 19th century, railroad barons and gold-rush millionaires flocked to Nob Hill to build their mansions.

To really understand San Francisco, you’ll need to brush up on your cable car history and the place to do that is at the Cable Car Museum (1201 Mason Street).

Located in a historic building that is itself the heart of the cable car system, the museum has engines and pulleys that pull the cables into the building.

Entry to the museum is free.

Planning on going soon? Here are some things to know before you travel to San Francisco.

3- Cycle across the Golden Gate Bridge

Another romantic thing to do in San Francisco is a bicycle tour of the hotspots.

Rent a bike at Fisherman’s Wharf (how about a tandem bike?) and cycle west through Crissy Field to the Golden Gate Bridge.

If you’re visiting with the family, going on a cycling tour is a fun thing to do in San Francisco with kids too.

4- Go for a walk around Nob Hill

Admire the grand mansions of Nob Hill before stopping for cocktails beneath the crystal chandeliers of the Ritz Carlton, where you can sink back among plush Victorian décor while you listen to jazz and gaze at the San Francisco skyline.

The grand 17-columned building began life in 1909 as the headquarters of the Metropolitan Life Insurance Company.

5- Enjoy a picnic in a park

On a sunny day, San Franciso is a lovely city to have a picnic for two, as there are many parks with lovely views.

Alamo Square Park (Steiner Street and Hayes Street) has a scenic view of the Painted Ladies and the city, as well as walking trails and pretty flower beds.

Golden Gate Park (Fell Street and Hayes Street) in the San Franciso Botanical garden has interesting trees and flowers from around the world. A nice spot for a picnic is Stow Lake, where you will find tables and paddleboats.

San Franciso is also a dog-friendly city and there’s a good choice of parks that you can also bring your best friend with you. So, if you and your partner would like to travel with your dog, read this guide to San Francisco’s dog-friendly spots.

6- Walk hand in hand around the Haight Ashbury district

In the mid-1960s, young people from all over the world gathered in the name of love and peace at the intersection of Haight and Ashbury Streets.

For breakfast, head to the Pork Store Café (1451 Haight Street) in the Haight Ashbury district and wash down a stack of blueberry pancakes with a hot mug of coffee.

There are shops with dreamy names like Dreams of Kathmandu selling hippie relics from that flower-power era in Haight Street, which is also lined with boutiques, vintage clothing shops and trendy internet cafes.

Pop into Body Time (San Francisco’s version of the Body Shop) for oils and creams made in San Francisco.

Ceiba is a hippie’s haven with funky clothes, jewellery, sculptures and eclectic artworks by local designers and artists.

It also has a record label that carries psychedelic trance, ambient and downtempo CDs.

For a true feel of the city’s hippie past, stroll past the house at 710 Ashbury Street where rock band the Grateful Dead once lived.

You won’t be able to look inside though, as it’s now a private home.

The largest Chinatown outside Asia is a bustling cultural metropolis with hundreds of the world’s best Chinese restaurants.

Watch the chefs at the Imperial Palace (816 Washington Street) dumplings in the open kitchen before tucking into some dim sum.

Their steamed dumplings are extremely fresh and very tasty.

After lunch, browse through Chinatown’s eclectic collection of shops for knick-knacks like porcelain teapots, silk blouses and mahjong sets.

Stroll into the Golden Gate Fortune Cookie Factory (56 Ross Alley) to watch the ladies at work.

Although there are other fortune cookie bakeries in the city, this factory has a history that goes back to 1962 and is the only place where fortune cookies are still hand made.

It’s a tea-lovers paradise with large glass jars that display over 300 different kinds of tea, ranging from the $2500 per-kilogram bamboo green tea to the more affordable and popular lychee black tea. Tastings of some of the teas are free.

Things to do in San Francisco at night

Ride a cable car down the hill to the E&O Kitchen and Bar (314 Sutter Street) where you’ll find the best Southeast Asian fusion grill in town.

Decorated with trinkets from the orient and a Spanish guitarist, the restaurant has a moody vibe that epitomises multicultural San Francisco.

10- Enjoy a night out at Biscuits and Blues

Devour a bourbon-flavoured Southern Chocolate Pecan Pie while watching a show at Biscuits and Blues (401 Mason Street) one of the USA’s top blues clubs.

The club has a constantly changing line-up of top blues performers from all over the nation but make sure you book as it’s a popular spot.

Looking for more things to see in the USA? Head to the east coast. New York is an unforgettable city and alive night and day while Boston is much smaller but has its own charms.

11- Drink cocktails at the Top of The Mark

With spectacular views of the city and bay, “The Top of The Mark” at the Mark Hopkins Hotel is a classic bar to sip cocktails (there are over 100 types of martinis on the menu) and gaze at the sunset.

The Mark Hopkins Hotel is at 999 California St., San Francisco 20 Things To Do In Austin At Night

Georgina Fullerton - 1 October 2022
The capital of the Lone Star State of Texas, Austin, is famed for its nightlife, music, food and "weird" culture. Austin is the fourth-most-populous...

20 Things To Do In Topeka Ks

20 Things To Do In Morro Bay

20 Things To Do In Portland At Night