Travel2Next
Home Europe Spain 10 Best Things To Do In Bilbao A space-aged museum and hip hotels sit next to Gothic churches, old bars and 19th-century plazas in the capital of Basque in Spain. Here are 10 classic things to see and do in Bilbao.

10 Incredible Things To Do In Bilbao

When historians compile a list of this centuries top 10 architectural wonders, Bilbao’s Guggenheim Museum is likely to be high up on that list.

This shrine to contemporary art is a collaboration between the Basque government and The Solomon R. Guggenheim Foundation of New York.

Designed by world-renowned architect, Frank O. Gehry, the building is a spectacular avant-garde titanium sculpture, which is an artistic masterpiece in itself.

The Guggenheim Museum Bilbao’s most distinctive feature is a glass-enclosed 50-meter atrium with a metal flower skylight that lights up the interior space.

The museum displays exhibitions as well as a permanent collection of artworks.

Walking through the building unfolds attention-grabbing angles that are at times more compelling than some of the artworks on display.

The Guggenheim and the dog Puppy (a giant floral sculpture beside the museum) are the symbols of Bilbao.

Stay at the newly opened and very contemporary Gran Hotel Domine for a panoramic close-up view of the museum from your room.

For more ideas on what to do in Spain, here are some posts you will love: You could spend hours browsing for antiques, shoes, ceramics and fashionable clothing.

The pastry shops are pretty good too.

In the evenings, the custom is to hop from bar to bar ordering very small glasses of beer or wine while you pick on bite-sized tapas canapés known as pintxos.

The evening atmosphere around Casco Viejo is vibrant and bar-hopping is a good way to experience a slice of local life.

The pick of the pintxos bars are Los Fueros (6 Calle Fueros) which is famous for its prawn dishes, Victor Montes (8 Plaza Nueva) and Victor (2 Plaza Nueva).

As gastronomy is considered an art in Bilbao, besides the traditional pintxos bars, the Basque capital has a wide variety of restaurants that offer culinary delights ranging from traditional cooking to creative contemporary cuisine.

Built in 1893 and the first of its kind, Puente Colgante is a hanging car ferry that is suspended from a steel bridge that stretches across the river.

Attached to wheels on tracks above it, it ferries cars from one side of the River Nervion at Getxo to Portugalete on the other side.

For great river views, take the elevator to the top of the bridge or stroll along the river bank to the mouth of the estuary where you’ll find lots of restaurants. Take the Monte Archanda funicular, which is located just across the river from the Guggenheim Museum Bilbao to the top of the mountain for a panoramic view of the city.

Better still, bring along a bottle of Rioja wine and a few pintxos for a picnic with a view.

From high above, you’ll appreciate Bilbao’s architectural dichotomy of old and new, where gleaming steel structures sit next to charming old buildings.

5- Find out more about Basque sports Basque sports and popular games are closely related to the daily chores performed by Basque men during olden times.

They occupied their time playing games that involved tasks such as grass cutting, logging and rowing.

Basque men have a reputation for strength, which they measure by lifting huge rocks, holding weight-carrying races and tugs-of-war.

However, the most popular sport is Basque pelota, a ball sport played against a wall either barehanded, with a bat or with a racket.

There are pelota courts all over Bilbao and the local bookmaker is a popular figure at many games.

6- Have fun at a lively festival July is a good month for festivals.

Soak in the atmosphere at the Bilbao Live Festival, where top international bands such as Guns N’Roses and The Pretenders perform alongside a host of new bands.

There’s also the International Folklore Festival across the river at Portugalete (www.portugalete.com), where a three-night folk dancing marathon takes place.

The event of the year is the Semana Grande, held in August, with dancing in the streets, bullfights and floats. For more information, see Holiday in Spain. Bilbao’s oldest building, Catedral de Santiago, is a Gothic church that was built on top of an old hermitage and is a recognisable landmark in Spain.

Dating back to the Santiago pilgrimages, the cathedral was once Bilbao’s central hub, where all the city’s main streets converged.

Today the stately cathedral is dedicated to the city’s patron saint and boasts the region’s most beautiful Neo-Gothic tower. The Museo Arqueológico, Etnográfico e Histórico Vasco (commonly known as the Basque Museum) is located in a baroque building which was originally constructed to house a church.

It has displays of Basque art, folk artefacts and photographs depicting Basque life through the centuries.

The Basque Sea hall has fun sound effects such as shrieking seagulls and crashing waves.

The Pastoral Culture hall is a step back into time, with bleating sheep and clanging cowbells while the Consulate hall has an enormous model of the entire region.

9- Shop in a street market Every Sunday, Plaza Nueva is the venue for a lively street market where people gather to buy coins and stamps, old manuscripts, books, plants and birds.

The football card section is the most interesting, with hordes of football fans buying and swapping football cards of their favourite teams.

Construction on Plaza Nueva began in 1829 and it has been the weekend meeting point for the people of Bilbao for centuries.

This festive event dates back to the end of the 19th century when the villagers, who used to come into town to pay the landlords their rent, would take advantage of the opportunity of being in the city to sell their home-produced goods. There are a number of beaches within easy striking distance of Bilbao.

Larrabasterra and Sopelana, both a 30-minute ride on the metro, are popular for water sports.

Plentzia, a peaceful estuary town with a marina, has a quiet beach that hasn’t yet made it onto the tourist trail.

Lekeitio is a fishing port with old Basque buildings and a long beach that’s great for swimming.

The stretch of coast after Lekeitio is more rugged and suitable for walking; there are coastal path along the sandstone cliff tops from Mutriku to Zumaia.

Surfers will need to introduction to Mundaka Beach, the famous surf beach that boasts the longest left break in the world.

Other places to explore while visiting Bilbao are Cantabria and the storybook village of Santillana Del Mar. 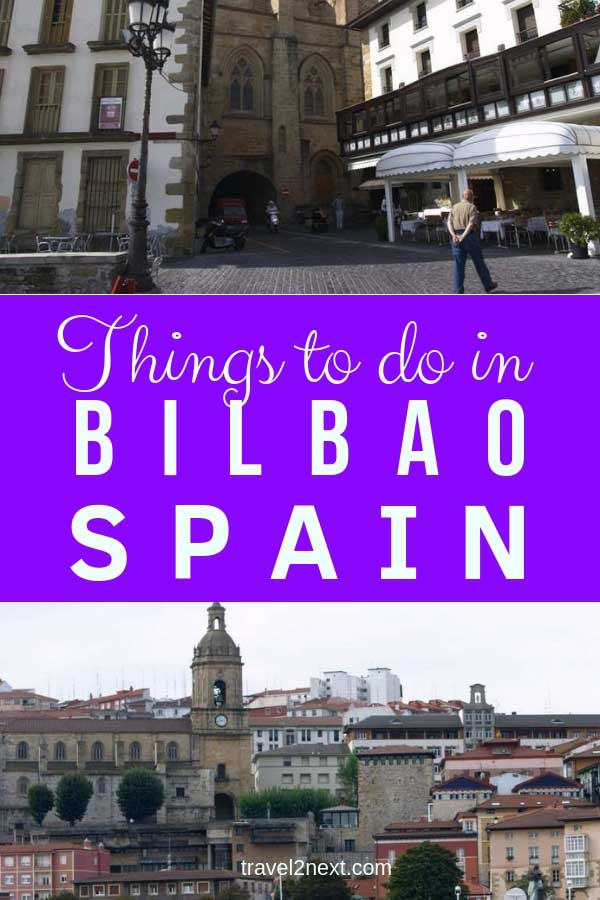