Burra is a historic town 160km north of Adelaide, South Australia’s capital. If you’re looking for fun things to do near Adelaide, a self-guided heritage tour is an interesting way to relive Burra’s 19th-century copper boom. Wandering around Burra, you could be forgiven for not guessing that Burra had a population larger than Brisbane and Perth put together. On the surface, the sleepy town of 2200 residents seems like a typical South Australian country town. But dig a little deeper and you’ll discover a treasure trove of lovingly maintained historic sites.

I arrive on a quiet Wednesday morning. There is a sprinkling of visitors in Burra’s tea rooms.

Many of the tea rooms double up as antique shops where tea and scones are accompanied by a hunt for china, crystal glassware, antique clocks and old furniture. At the Burra Visitors Centre, I sign up for the self-guided Burra Heritage Passport trail.

Burra’s main attraction is the Monster Mine and Morphett’s Engine House Museum.

The tall stone building of Morphett’s Engine House houses a working pump engine, old photographs, historic displays and a mine tunnel which is open to the public. The Monster Mine’s crater, with its glistening emerald waters and 80m walls, provides wonderful acoustics for the Jazz in the Monster Mine show held in February each year.

Burra’s copper mine was one of the richest in the world.

Discovered in 1845, by local shepherd, Thomas Pickett, it attracted miners from Europe and the UK, but most of the miners came from Cornwall.

Around the same time, another shepherd, William Streair, also discovered copper in another location close by.

Pickett and Streair hooked up with two rival companies, nicknamed The Nobs, a group of pastoralists who formed the Princess Royal Mining Company, and The Snobs, South Australia Mining Association, a group of Adelaide traders.

Neither could raise enough money to buy the land where the mines were discovered individually, so they joined forces and purchased the land together for ₤20,000.

The Nobs and Snobs drew lots and the South Australia Mining Association ended up controlling the Monster Mine, which by 1850 became Australia’s largest metal mine.

Do you think Burra should become a World Heritage site?

The walking trail around Market Square takes in 19 landmarks including churches, the telegraph station and post office and the Burra Hotel, which was built in 1847 as the Miner’s Arms.

I can easily picture rowdy Cornish miners spilling out of the hotel after an ale or two and falling into a brawl in the dusty street.

In those days, things were pretty rough. Outside of Adelaide the Burra Police Lockup and Redruth Gaol became the first law enforcement structures to be built in South Australia. My key lets me into Redruth Gaol, which was used to film the trial scenes in 1979 Australian film Breaker Morant.

Not much has changed since the gaol was a prison for 30 men and women.

The wooden floors are uneven and you can still see the broken glass on the walls of its exercise yard, placed there to stop the prisoners from escaping.

A flood of miners swarmed into Burra hoping to make a fortune and this caused a huge accommodation problem.

The short-term solution was to excavate dugouts in the bank of the Burra Creek providing instant living quarters for miners and their families.

Over the years, the creek slowly flooded and washed away most of these dugouts but wandering through the few dugouts that are still there is fascinating. The dugouts stretched along the creek for five kilometres and became the homes of 1600 people.

The lucky families moved into cottages, which were some of Australia’s first company-built housing.

One example is Paxton Square Cottages, which can be rented as a family-friendly accommodation option.

Most of Burra’s buildings were built from blue stone, which was abundantly available in the area.

In those days there were separate villages for each migrant group, each with its own shops and schools.

The Cornish lived in Redruth, the Scots in Aberdeen, the Welsh in Llwchwr, and the English in Hampton.

Although there’s nothing left of Hampton village, many historic houses in the other villages have been renovated. Another fascinating historic site is the Unicorn Brewery, which once supplied beer to Burra’s surrounding areas.

The brewery’s maze of underground cellars is a cool spot to wander when the mercury hits the thermometer.

When licensing laws were introduced in 1902, the brewery was closed down and most of the buildings were demolished for their stone.

Burra Heritage Passport is a key to eight locked historical sites. It comes with a guidebook of 65 historic sites that can be explored on an 11km driving trail. The self-guided tour is available seven days a week from the Burra Visitor Centre. Phone (08) 8892 2154. 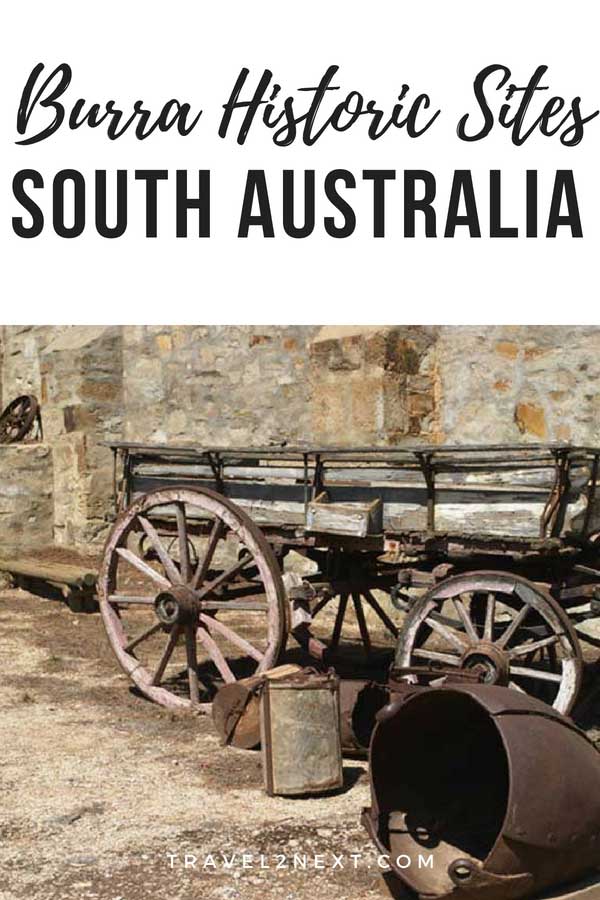