When Carolyn Wong’s daughter left home to join ‘Diamond Tooth Gertie’s Can-Can Girls’, Carolyn didn’t know how her daughter’s move was going to change her own life. Moving from conservative Winnipeg to a Gold Rush city like Dawson City, Yukon was a big leap for a young girl like her daughter, but Carolyn was not lacking in a wild streak herself.

20 before, she’d married a Chinese-Canadian ranger who’d given her a summer job at a National Park where – until then – only men worked.

Dawson City however, was no National Park and ‘Diamond Tooth Gertie’, was a gaming hall with a reputation to match. 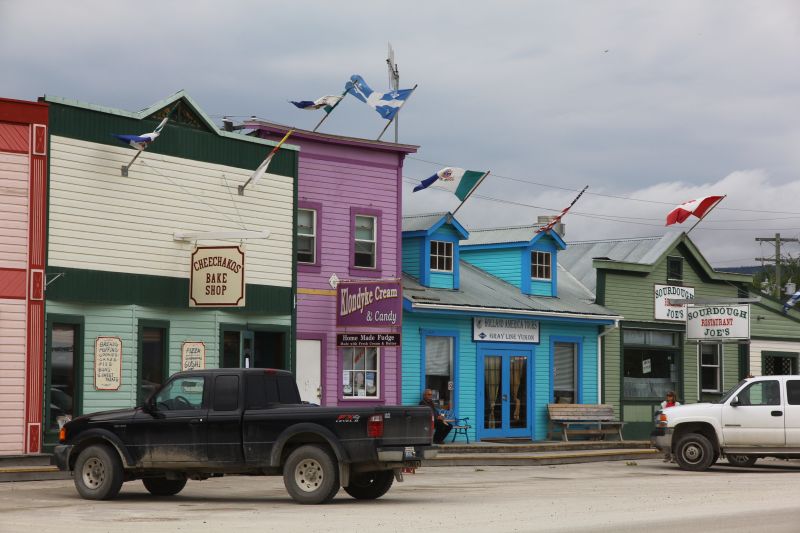 Dawson City, Yukon, is the stuff of dreams, literally. Dreams of gold that conjured up a town in a place where for centuries the Hän-speaking people of the Tr’ondëk Hwëch’in had used as a summer meeting spot.

From there they would launch their annual moose-hunting expeditions on the Klondike Valley.

The discovery of gold in the late 19th-century caused a massive influx from neighbouring gold rush sites, especially San Francisco and Alaska.

Dawson, located at the junction of the Klondike and Yukon Rivers, soon acquired city status in 1902 after the original canvas tents were replaced by hotels, saloons, opera houses, churches and later on schools.

The mining camp became the biggest city west of Winnipeg and north of San Francisco. Today, at first sight, Dawson City looks like a western movie set but the difference is that it is real, with real people living in it.

The building facades are elaborate and ornate, much in keeping with a Gold Rush town although the humble weatherboard is king here, now painted in rainbow colours from subdued pastels to brilliant oranges and reds. 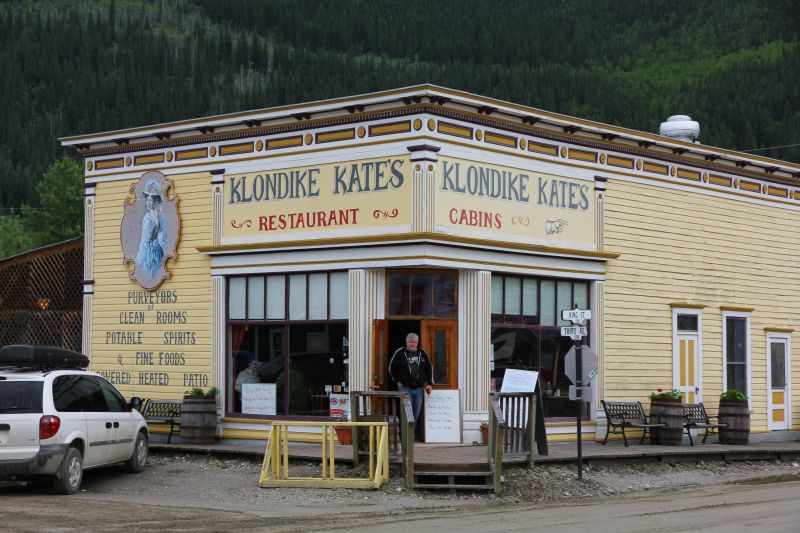 Dawson City can can dancers

When Wendy Cairns bought Margaret Vera Dorval’s house (from which she had ran a busy house for the ‘Daughters of Joy’ together with a bootlegging business in Dawson) Wendy didn’t expect the initial hardship it would bring her.

Dorval had an exotic story behind her with links to brothels in the East (some say Shanghai) and to an aviator lover who used to drop parcels for her from the bomb-bay hatch of his aeroplane in the late 1930s, events which earned her the nickname of Bombay Peggy.

After she died, the house was abandoned and left derelict for decades, timbers rotting in the slowly sinking swamp of downtown Dawson. You’d be forgiven for thinking Carolyn Wong and Wendy Cairns are characters from the early 1900s, but they aren’t. They are present day entrepreneurs who decided to try adventure and embrace risk at a mature age.

When Carolyn Wong first came to visit her Can Can dancing daughters in 1990 (‘there were two by then, as my second daughter followed the first’ – she says), she fell in love with Dawson city and proceeded to persuade a female friend back in Winnipeg to join her in a move to Dawson to try their luck with a Bed and Breakfast business.

After a few successful but hard working years, Carolyn is now the owner of the Aurora Inn (a sizeable hotel) and the best restaurant in town, La Table. Wendy Cairns – who is an ex Can-Can dancer herself – knew something about hard work when she bought Bombay Peggy’s bawdy house in 1998 but the battle with timber rot ‘left me practically broke’ she says, looking up from her glass of mineral water, her intense blue peepers beaming.

She had the entire house moved to higher ground; restored it at great expense and transformed it into a unique boutique hotel where all rooms are themed and furnished with period pieces.

The problems she encountered were the same the pioneers had: rotting timbers. Except along the riverfront, the rest of Dawson was a frozen swamp.

The method for building was to lay timbers on the ground creating a base to put a building on.

The construction of streets followed the same pattern after wagons transformed the thawing frost into a quagmire mess.

Dawson’s streets remain unpaved to this day giving it that unique, authentic look.

What is it with Can-Can girls and Dawson? As a flourishing Gold Rush town, this was a place where successful miners could get anything money could buy: from a Can-Can troupe to a bride.

Women of the Gold Rush

In the early 1900s, at the height of the Canadian Gold Rush, Dawson was labelled The Paris of the North. Extraordinary tales of Gold Rush women abound in the Yukon.

Women that toughed it out; went over the treacherous Chilkoot Pass; shot the rapids and finally arrived at an isolated community in a harsh, cold climate.

They came as entertainers, madams and a few as entrepreneurs to fulfil their Dawson City dreams.

One example was Belinda Mulroney – a poor Irish girl – who on arriving in Dawson in the early 1900s threw all her coins into the river, bowing she would never need small change again. She went on to build an empire. Twice.

She had to start all over again after her French husband squandered her fortune. Life was hard for people who came out of their own will but worse for the animals they brought to achieve their dreams: horses and sled dogs.

Jack London immortalised the plight of the Yukon sled dogs in his novels Call of the Wild and White Fang but he also wrote about the fate of many horses.

Today Dawson City is a picturesque town where the ute is king.

The old Sour Doughs (as the first pioneers called themselves because they always carried with them a bit of ‘mother dough’ to start their loaves) now run boutiques, ice cream parlours, real estate agencies and restaurants while still keeping their passion for this harsh part of the world.

The Yukon is magnetic.

Taking the train across Canada

20 Things to do in Canada

10 Things to do in Niagara Falls

11 Things to do in Vancouver Island