Mention the word “safari” when visiting Kenya and most people think of driving around the Masai Mara with telephoto lenses in search of lions, cheetahs, elephants, giraffes and the elusive leopard or two. You might even picture hiking in the jungle on a Uganda gorilla safari. That’s hardly surprising as there was a time when going on safari usually meant heading off on a big game hunt. Actually, in Swahili (the national language of Kenya) safari means much more than searching for wildlife in the bush.

A safari is an overland journey that encompasses so much more than seeing wildlife.

I had been on wildlife safaris in Kenya’s Masai Mara (a balloon safari is amazing) as well as other wildlife reserves around Africa before.

But I was quite surprised to discover that a road trip north from Nairobi offered a rich visual kaleidoscope of Kenyan life. 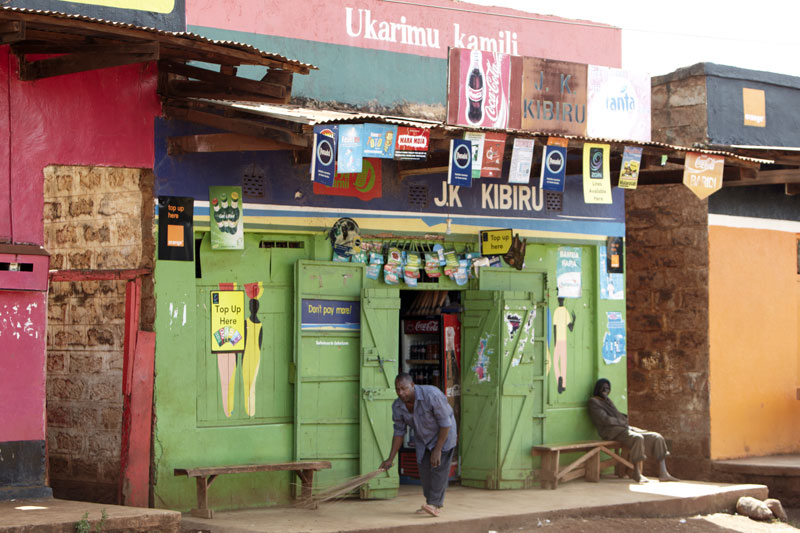 From Nairobi, we headed off in a Land Cruiser, five of us bumping along with the windows down and the wind ruffling our hair.

The vehicle had no air-conditioning and the seats are well-worn. It wasn’t a luxurious means of transport by any stretch of the imagination.

As we drove along Thika Road, away from Nairobi, the air had a distinct smell – a blend of tropical and earthy.

I’m not sure if it was just my imagination but I think I could almost smell the bougainvillaea growing by the roadside.

The sweet scent of tropical flowers mingled with the organic odours of wet earth, muddy from the morning’s rain shower, the ripening fruit in the roadside stalls and the crowds of people walking along the roadside.

The scenes from the window were a documentary of daily life.

We passed coffee plantations and fruit farms, cattle wandering around by the side of the road and brightly painted low-rise buildings. As it was early in the morning, one would presume the people were walking to work en masse.

The men and women walked and walked, unflinchingly as the cars, buses and Land Cruisers splashed through muddy puddles, showering some of the crowd with sprays of muddy water.

Dust clogged my nostrils as I breathed the scents of rural Kenya. While not everyone in Kenya could afford to buy a car everyone seemed to have a mobile phone or two.

There were advertisements for Safaricom everywhere.

The billboards were entertaining and filled with advertisements for recognisable international brands like Milo, Nescafe and east-African soft drink Alvaro. Shopfronts painted in bright colours – pink, yellow, green and orange – caught my eye. And the names of businesses were entertaining. Think “The Blessed House Business Centre” and the “Frames of Mind” secondary school.

The road passed Thika where Elspeth Huxley described her childhood in The Flame Tree of Thika. Closer to Sagana, more roadside stalls appeared stacked with fresh local fruit like mangoes, watermelons and vegetables. There were pumpkins and avocados so huge they didn’t fit in the palm of my hand. Near the market town of Karatina, farmers and fishermen sat crossed-legged by the side of the road. Their floor mats were piled high with fruit and fish.

The competition was fierce and as soon we slowed down, the vendors were on their feet pushing and jostling and sprinting towards us balancing baskets on their heads.

In a flash, we were surrounded by men and women trying to shove fish and fruit through our windows.

They dangled them in front of our windscreen thumping our vehicle as if doing so would entice us to open our wallets.

The scenes of rural Kenya were an enormous contrast to the Mount Kenya Safari Club near Nanyuki.

The iron gates, with the Mount Kenya Safari Club logo two elephant heads, is the border that separates everyday Kenya from this oasis of luxury.

A smartly dressed guard stood sentinel at the guard house. He was obviously expecting us and saluted as the gates swung open.

We rolled into an entirely different world. The gulf between the part of Kenya outside the gates and the luxury we experienced at Mount Kenya Safari Club was enormous. Think marble bathrooms and manicured lawns.

It’s not the kind of bush luxury you’d expect in a Masai Mara luxury camp. Mount Kenya Safari Club has a much glitzier personality.

The original 1938 house was called Mawingo (meaning clouds). It was owned by a rich American Rhoda Lweinsohn, who was fell in love with a French adventurer. The romance between Rhoda and Gabriel Prudhomme on lasted a year.

In 1959 (soon after filming The Bridge on the River Kwai) William Holden came across the house while he was on a hunting safari.

Holden and his friends (millionaire Ray Ryan and Swiss banker Carl Hirschmann) were recuperating in the house as Ryan had sustained an eye injury.

The trio loved the property so much they ended up buying it. They then turned it into an exclusive private club for the rich and famous.

Famous people who have stayed include the Maharajah of Jaipur, Conrad Hilton and Winston Churchill. The guest list was as good as a night at the Oscars. Think Bing Crosby, Charlie Chaplin and Steve McQueen.

Even though it’s now a luxury hotel operated by Fairmont Hotels, you can feel the echoes of the club’s heydey. Fairmont also runs a famous historic hotel in Nairobi called Fairmont The Norfolk.

In Duma’s Corner, there are black and white photographs of movie stars hanging on the walls. The corridors are adorned with stuffed wildlife trophies.

The good times kept on rolling on until the 1970s, when infamous arms dealer Adnan Kashoggi would drop in by helicopter with six buxom blondes.

Actually, I ended up sleeping in Adnan Kashoggi’s triple-sized king bed in another safari camp. But that’s another story for another day.

Apparently, Kashoggi once flew out a group of belly dancers and the entire Egyptian orchestra to the club to entertain at one of his big shindigs.

Fairmont Mount Kenya Safari Club is a plus oasis with fine furniture and polished floors. It has a lovely golf course, tennis court, swimming pool and sauna. And a 400ha -hectare game reserve called the Mount Kenya Wildlife Conservancy. The lawns are green and filled with cranes, Egyptian geese and the tourists staying in the hotel.

The horses are saddled and we headed off on a horseback ride in the national park.

The pace was pretty fast, much faster than any resort ride I had ever experienced before. Occasionally the guide would break into a trot. As the most inexperienced rider in the group, the guide put me next to him in the front.

We trotted over elephant poo and passed a herd of zebras. I learned that there were elephants, buffaloes, leopards and rhinos in the park.

This bit of news was particularly disturbing to me as I wasn’t really a very experienced rider.

I managed to stay on my horse and really did enjoy the experience. I learn that my horse has a temper.

On my last morning, I sat on the terrace sipping beetroot juice and drinking the local tea, Katepa Pride, the Kenyan way. The tea is served in a cast-iron pot with warm milk. The clouds rolled in as I drank my tea and soon Mount Kenya vanished from sight.

Check the latest prices of hotels in Kenya here 14 Things To Do In South Korea