Bagel king Joe Morena has devoted his life to capturing Montreal’s burgeoning bagel culture. Many say he makes the best bagels in Montreal. He reveals the secrets behind his art and why these Montreal bagels are the best in town.

The aroma of bagels baking in the wood-fired oven makes my stomach growl as I observe the steady stream of customers rapidly forming a queue.

Bagels have become a Montreal staple and are so entrenched in the culture that the bagel-making process should be part of the Economuseum movement.

The clientele is mostly local residents who grew up on Montreal style bagels from this very bakery, which opened in 1957. 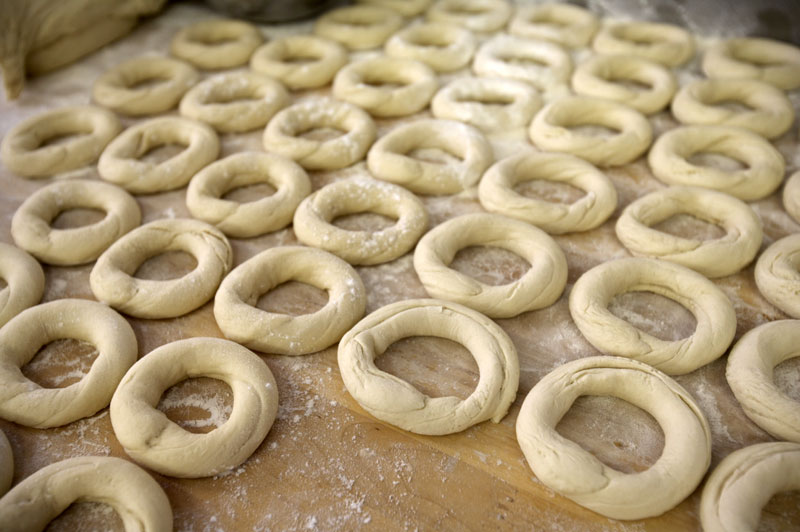 Montreal’s first bagel recipes were brought to the city by Jewish settlers from Poland in the 1900s.

Over the last decade, making bagels has evolved into an art form and consuming them has become a religion.

Bagel lovers in this city are fanatical about where they obtain their spoils.

The two most established bagel makers are St-Viateur Bagel Bakery and Fairmount Bagel.

The latter was the first to open in Montreal in 1919 and sells more than 20 varieties of bagels.

Its bagels have even been exported as far afield as outer space: Canadian astronaut Gregory Chamitoff packed 18 sesame bagels for his expedition to the International Space Station in 2008.

The owner of St-Viateur Bagel, Joe Morena, has been making bagels since the age of 14, earning him the crown of Montreal’s longest-serving bagel-maker.

He joined the bakery in 1962, first working as a delivery boy for the bakery’s original owner, Myer Lewkowicz, who was then in his nineties.

Lewkowicz, a Polish Jew who migrated to Montreal after the Holocaust, was impressed with the young son of Italian immigrants.

The affable Morena eventually took over the business and expanded it to include three more bakeries and two bagel cafes: Cafe Mont-Royal, in the trendy European neighbourhood of Mont-Royal; and the popular Cafe Monkland, in upmarket Notre-Dame-de-Grâce.

The original bakery in Mile End looks much the same as it did when it opened 53 years ago.

Two wood-burning ovens keep bagel bins and wire-baskets piled high with piping hot bagels, and 40kg sacks of Canadian sugar and flour are stacked in a corner along with bags of sesame seeds imported from India.

The one thing that has changed over the years is the addition of a wall of fame, where photographs show Morena clasping hands with celebrities such as Celine Dion and Leonard Cohen.

Celine Dion is originally from Montreal and has been buying St-Viateur bagels for years.

But fans hoping to catch a glimpse of the singer will be disappointed.

“These days her bodyguard buys them for her while she waits outside in the limo.”

Of these, 36,000 bagels are delivered to cafes, stores and supermarkets throughout Canada, and shipped to the USA to fill orders placed through the company’s website.

New York-style bagels, which are usually mass produced and machine-made, are popular around the world.

However Montreal’s bagels are denser, chewier, sweeter and, most important of all, they are always hand-made.

“A little love makes Montreal bagels special. We make them the same way they were made hundreds of years ago,” Morena explains.

“We use almost exactly the same recipes as I was taught the day I began work, the only ingredient that has changed is the use of malt flour instead of molasses.”

At the back of the bakery, I watch workers heave a 25kg slab of dough out of a dough-making machine and onto a rolling table.

The dough is folded, sliced, hand-rolled into individual rings, then plunged into a copper pot of boiling honey water, dipped in sesame seeds and baked in a wood-burning oven.

The combination of boiling the dough in honey water and then cooking it in a wood-fired oven gives the bagels an amber colour and a crisp crust.

Where to eat bagels in Montreal

You would be hard-pressed to find a restaurant or cafe in Montreal that doesn’t serve bagels.

Montrealers eat bagels in a variety of palette-pleasing ways – cream cheese, smoked salmon, capers and onions is one example of a savoury topping or for a sweet breakfast, a bagel might be served with yogurt, honey and fruit.

Franchise cafe chain Eggspectation, which began in Montreal, has five bagel dishes on the menu including Bagel Dore – two bagel halves dipped in egg batter, cooked on the grill and topped with bananas and strawberries.

Many locals, however, prefer their bagels hot and slathered with butter or, better still, fresh out of the bag on the way home from the bakery.

As for the bagel king himself? “I eat mine with ricotta cheese and Nutella,” Morena admits.

How to make bagels

I decide to try my hand at making bagels so Morena slices off two lengths of dough.

He demonstrates how to roll the dough evenly with the left hand, then loops the dough into a neat ring, stressing that the hole in a Montreal-style bagel has to be a feature.

I fail the rolling test and my attempts to loop are even more pitiful.

My looped dough is twice the size of Morena’s and my hole is far too insignificant.

“We won’t be making any money on this bagel,” Morena laughs.

We drop our rolled dough into the pot of boiling honey water, then Morena scoops them out and we dip them into bowls of sesame seeds.

A worker places them alongside rows of other bagels arranged on a long timber plank which is then pushed into the oven.

It occurs to me it would be so much quicker to make bagels without holes.

“I’ve made 35 million bagels and I ask myself this question every time,” says Morena with a shrug.

He has no answer except that a bagel – especially a Montreal-style bagel – just wouldn’t be a bagel without the hole.

Another Quebec staple, Canadian maple syrup, is world famous. While in Quebec, head to one of these sugar shacks to taste.

Here are some traditional Canadian foods and for more things to see in Canada see Best of Canada. 20 Things To Do In Boston At Night