The lappet-faced or Nubian vulture is one of 16 old world vultures belonging to a bird order which includes eagles, kites, buzzards and hawks. It is the largest and one of the rarest of African vultures. Vultures do not go after healthy prey, but only attack wounded and dying animals. Its powerful hooked bill cuts easily into carrion, even the thick hide of a buffalo. Because of this they are the first bird in to a kill to open up the carcass – the so called ‘can-openers’!

Its bare head and neck save lengthy feather-cleaning after plunging deep into a messy carcass.

The strongest and most dominant vulture at kill sites, it can easily bully other vultures and even the largest eagle into submission. 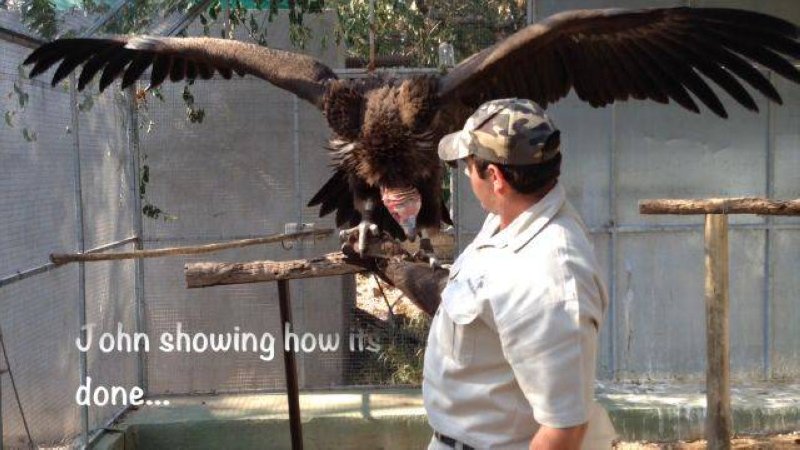 Old World vultures do not have a good sense of smell – they rely exclusively on incredible eyesight to locate food. Their immense broad wings with widely spaced primary feathers are ideal for soaring and gliding for long periods.

A soaring vulture can spot a 3-foot animal carcass from 4 miles away. It is because of this that black South Africans hunt them down to eat their brains as part of witchcraft beliefs or ‘muti’.

They say the birds are clairvoyant and thus use them to gain lottery numbers or for gambling.

If you eat the bird or its brains then you too will have the vision of long sight and see into the future.

Black South Africans have thus been known to poison carcasses and kill hundreds of vultures in one feed sitting. Because of this, and also the diminishing land on which they can land safely, they are now endangered in Africa.

But, they provide an essential role in the pyramid of wildlife. For example they are equipped with a digestive system that contains special acids that can dissolve anthrax, botulism and cholera bacteria.

By consuming the carcasses of diseased animals, vultures prevent the spread of life-threatening diseases such as rabies and anthrax among animals and humans.

Bula was a young lappet-faced vulture we met at Moholoholo Animal Rehabilitation Centre, near Hoedspruit in South Africa while we were volunteers at Moholoholo.

Bula was not actually one of our personal charges to look after. But we were curious about him as he was set apart from the main vulture enclosure where another 20 to 30 mixed vulture species were kept. He was alone in a small enclosure away from the others. Apparently he had been found as a chick fallen out of the nest and was hand reared. He hadn’t yet had his first birthday but already weighed about seven to eight kilograms with a wing span of about 1-2 metres.  They can grow to 10kg and have a wing span up to 3 metres.

John, one of the staff at Moholoholo, had been his carer for the last few months. He was trying to teach him to fly to the glove whilst holding a meat treat.

Although John had a very good working relationship with Bula, he still had scars from training exercises where he had been accidentally ‘taloned’.

Bula had attitude. There was something about him that I found fascinating but yet, quite funny.

He had a way of looking at you through the bars of his cage and twisting his neck and almost rotating his head 360° in a particularly evil manner, like something out of Exorcist.

He would shrink his head into his hunched shoulders, lift his wings slightly and start to come towards you in a mean, hopping manner. I thought he resembled Dracula, which soon became his nickname.

If you went into his cage with John there was no problem, but no way would you ever try to enter alone! It became almost a test of character and a right of passage for volunteers to try to fly Bula at least once in their time at Moholoholo.

I had a good excuse having just recently had frozen shoulder surgery, so there was no way I could even think of trying to hold a huge and heavy bird like Bula on an outstretched arm (thank God!).

Tony in his past had trained a falcon to fly to the glove and was familiar with the training and flying methods for such birds.

After watching Bula score points every time a volunteer attempted to fly him, even he was very hesitant.

However, he finally decided to give it a go and did so with John trying to take the footage as well as be look out for both of them! The video shows it all…

One long stay volunteer Rose had a go and said she would never try again! A new volunteer Sophie, a vet student who weighed probably no more than 45 kg, also had a go.

She managed quite well but didn’t have the strength to hold the Bula on her outstretched arm. When her arm fell and Bula dropped to the floor, in a reflex he flew back up at her, with his talons contacting her T-shirt around her waist. Her facebook photos show her proud claw marks!

I loved Bula. His Dracula-like manner when challenged at his fenced enclosure was very funny to watch.

I am sure he would do well in Hammer House of Horror movie. He was a natural. John told us that Bula will be on show one day to the regular visitors to the centre, once he had mastered his training.

So look out for Bula in the future at Moholoholo, he will become a face and mass of feathers you will not forget!

Looking for more things to do while in South Africa? Try these on for size:

Looking for an iconic Australian wildlife experience? Currumbin Sanctuary discount tickets are not easy to come by but if you look hard enough you could get lucky. If you prefer animals of the rainforest in the wild head north to the Daintree and south for a Tasmanian devil wildlife park.