Yunnan is one of the places to visit in China that nobody thinks of because it’s a little out of the way. A Yunnan holiday offers a serene mountain getaway with World Heritage attractions, small cities and towns.

The World Heritage old town of Lijiang and the otherworldly Shangri La (yes there is a real place called Shangri-La) are charming to explore. Along the Tea Horse Route, between Lijiang and Shangri-La in China, is Tiger Leaping Gorge, which is.a natural China landmark of immense beauty.

Maybe it’s the consequences of landing at an elevation of 3300m above sea-level or perhaps it’s the dreamy landscape of mudbrick villages, monasteries and monks.

There are strange sights, like little black pigs stopping traffic as they trot across zebra crossings.

Whatever is in the air in Shangrila leaves me feeling like I’m on another planet.

After being in Shangri-La for a few hours, my head starts to throb and if I exert myself I feel breathless.

About one-third of the people living in the region are Tibetan and Tibetan traditions run strong.

The Tibetans believe in karma and that your next life will be influenced by the actions in this life.

So it’s not surprising Shangri La is a peaceful place to spend your Yunnan holiday.

My guide, Lobsang, is a local man who was a monk in India and Tibet.

Lobsang speaks Tibetan, Nepali and English fluently but his Chinese is a little rusty.

If you’re planning a trip to China have you considered visiting Xiamen in Fujian province? Here are some Xiamen tourist attractions you might enjoy. At the Little Potala Palace, I’m amazed at the temples and statues.

One temple has an eight-metre-high statue of Buddha, exquisite paintings of Buddha’s lifestyle and communion tables decorated with yak-butter lamps.

The area now called Shangri-La used to be a major stopover along the ancient tea horse route.

This route through Yunnan was how tea from China was transported to Tibet, India and Burma.

These days, Shangri-La is an old town with a warren of shops selling yak tails, horn and meat.

If you’re not in the market for any of those, you might like to buy silver jewellery and brightly woven shawls as souvenirs. The tea horse route was well-travelled during the Tang Dynasty (618 to 907 AD).

Tea was transported by mules and on the backs of tea porters.

These porters walked for days carrying their own weight in tea.

They walked through snow, wind and along high mountain ranges. It was dangerous and exhausting.

China’s Pearl River Delta is an interesting place to visit. Here are some things to do in Guangzhou, places to visit in Macau and a Hong Kong itinerary to help you plan.

There are walking circuits and bus circuits. You can do a combination of walking and when you get tired, hop on a bus.

It’s worth walking around Shudu Lake, which has timber boardwalks along the shore.

Where to stay in Shangri La

The view of Little Potala Palace from my room at MGallery Songstam is captivating.

It’s a serene vista of a place that seems far away from everything and everyone.

While in China, a Yunnan holiday is something you’d choose to get away from the crowds, perhaps with a few good friends.

My hotel captures the essence of the region in its design, with its decor of mantras, thankas and Tibetan door drapes.

There’s a Tibetan restaurant as well as a western restaurant. The menus are dominated by yak.

It’s interesting to taste the local food at first but after awhile, the novelty of downing fried yak yak soup and yak hot-pot soon wanes.

The Tibetans believe the mountains around Shangrila have a magical energy so a visit to the hotel’s Linka Spa is a calming experience.

The spa’s menu has a list of intriguing treatments and ingredients, such as yak-butter, honey and roseroot. 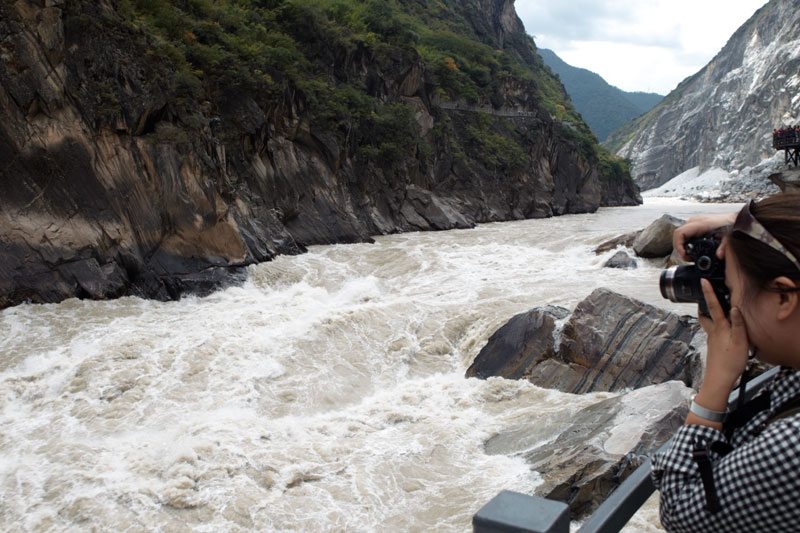 A road trip from Shangri-La to Lijiang (another main centre on the tea horse route) is much easier to navigate.

It takes around four hours and there’s some beautiful scenery along the way.

The biggest attraction is Tiger Leaping Gorge, which is a beautiful gorge on the Jinsha River ( a tributary of the Yangtze River) . 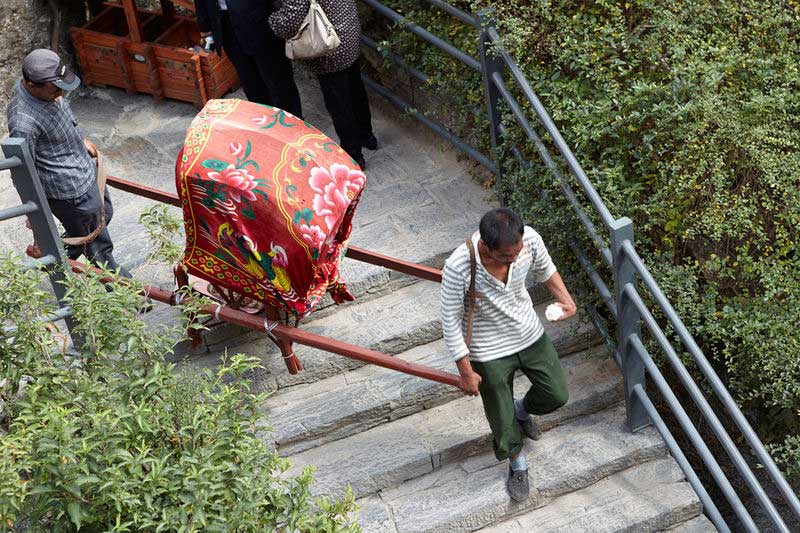 Hiking down into the gorge is easy but climbing back up can be quite a struggle.

On the opposite bank, I squint to catch a glimpse of the stone statue of a tiger, apparently on the spot where the tiger is believed to have leaped from. You can get to the statue on foot if you follow the path called the “high road”.

This is the local Tiger Leaping Gorge hike – a rough, earth track regularly used by Naxi people to travel between villages.

But there’s another trek known as the “low road”, which is sealed.

This path is used by day-trippers to get to the various lookout points around the gorge.

While climbing down stairs to the gorge, I don’t even break a sweat but getting back up is another story.

If you’re affected by high altitudes, it can be quite a struggle. Fortunately, at Tiger Leaping Gorge, there are strong wiry men who will carry you up in sedan chairs. It’ll cost about 100 yuan ($15).

Halfway up my heart starts pounding and I feel light-headed.

I give in to a toothless sedan man who looks about 90.

His friend seems young and strong but they both puff and pant as they haul me up the steep stairs.

At one point, my chair tips backwards and I think I’m going to fall.

The sedan men stop for a rest and I take the opportunity to walk again but 20 steps later, I’m back in the chair.

I’d realise how difficult it is to climb even a few steps at this altitude. Lijiang’s cobblestone laneways, slanting rooflines and ancient canals are out of a Chinese fairytale.

Add to this, Lijiang’s Jade Dragon Snow Mountain and you have the makings of a fairyland.

After dark, this World Heritage town is full of Cinderellas.

It’s a bit of a contrast to the natural beauty of Tiger Leaping Gorge nearby. 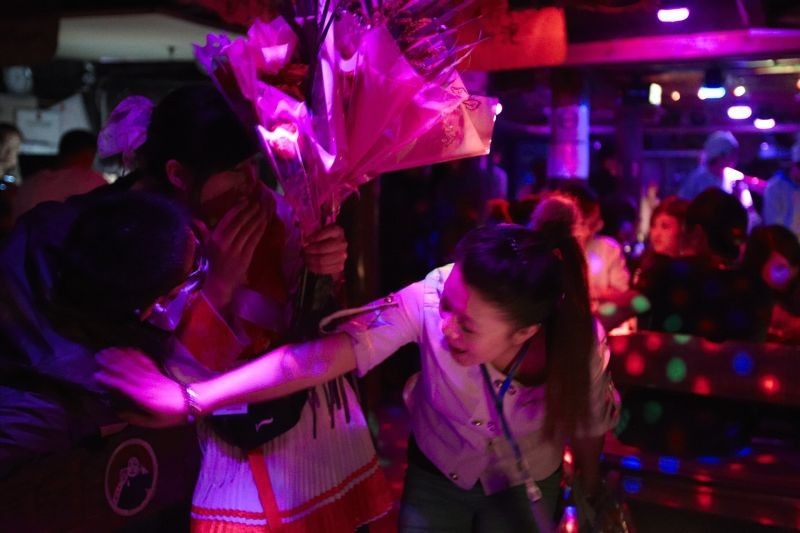 Charming by day, Lijiang’s streets are a throbbing hub of nightlife as the culture of China’s 21st-century shows itself in Xinhua Street or “bar street” after dark.

Cantonese, Taiwanese and Mandarin pop music blares from discos and bars that are housed in ancient Chinese timber houses. These entertainment dens are packed with crowds of young Chinese drinking beer by the boxful.

Ordering one beer is simply not in the spirit of things. Most Chinese visit in groups and buy a slab of beer. They drink and dance beneath blue, green and pink neon disco strobes.

Walking through Lijiang’s bar street feels like you might be in another dimension, perhaps even a futuristic fairytale. The entertainment is bordering on bizarre and seems to centre around drinking games.

In one nightclub, the crowd goes wild when a young woman downs three cocktails under an eerie blue fluorescent light.

The host bursts into a staccato and starts leaping around the stage performing in a wild 70’s disco-style number and the onlookers just go berzerk. 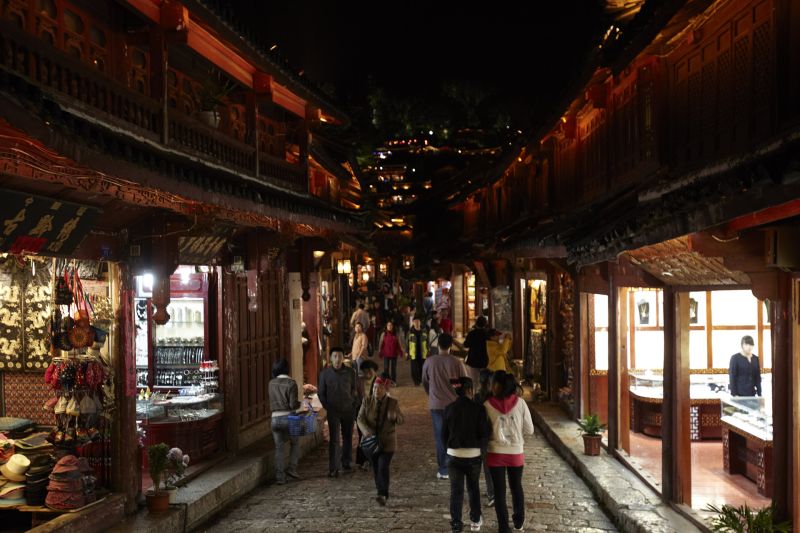 It’s a lovely night as I follow the moon past yak and snack shops. One one corner, I stop to take photo of a man dishing out sweet bean curd from earthenware pots. Wandering into mysterious alleyways filled with quiet dimly lit bars is a huge contrast to the nightclubbing antics of sin street.

Like Shangri-La, another fascinating destination in Yunnan, Lijiang is a hub for a minority culture.

Lijiang was once the capital of the Naxi kingdom, the largest of the 26 minority groups that live on the plains around the snow-covered Jade Dragon Snow Mountain.

The Naxi are unique and their culture is distinctly different to Han Chinese.

They have their own language, pictographic writing and they follow a religion known as Dongba religion.

Dongba is a blend of shamanistic rituals, Tibetan Buddhism and Confucianism.

Another minority group, the Mosuo, are even more intriguing.

The Mosuo are a matriarchal society, where property is passed down from mother to daughter.

Up until the 20th century, the institution of marriage didn’t even exist in Mosuo culture.

It was commonly acceptable for women to have any lovers they wanted whenever it pleased them.

When a girl turns 12, she is to have male visitors spend the night with her in the family home.

The aim is for the girl to conceive and women choose men who are physically strong and fit.

The children are looked after by the mother’s family and they say the Mosuo women have so many lovers most don’t have any idea who the fathers are.

The women work the fields and are the breadwinners while the men are simply there to procreate.

Visit during March to August for wildflowers or September and October for blue skies and harvest season activities. Lijiang is absolutely stunning, with a mountainous landscape that has 13 peaks above 4000m.

You can’t miss the eye-catching Jade Dragon Snow Mountain. And the cable car ride to the top is an experience to remember.

At the cable car station (3356m above sea level), you board a cable car and glide over trees, mountains and glaciers.

As you approach the peak, the air turns frosty. I’ve come prepared to battle the effects of high altitude and by the time I reach the viewing platform (4506m above sea level), I’m sucking frantically at my canister.

Above me, the highest peak, Shanzidou (5596m), looms big and white.

As I climb the timber stairs leading to another viewing platform, towards Shanzidou’s peak, I feel like there’s magic in the air. I’m not quite sure if it’s the altitude or the breathtaking scenery or the children make snow angels below.