“Look, look… have a good look at the two tigers lying there,” howls our tracker Girish pointing his finger towards a grassy scrub. “Sir your dream has come true; you have now seen the famous Royal Bengal tigers,” he exclaims with a triumphant look on his face.

Spotting a tiger is about as rare as if he had shown me a blue moon.

Although my pulse is racing, I don’t disagree with him.

It has been my long-time dream to see the big cats in their own natural domain.

With the help of Girish what I’m gazing at is a mass of orange and black stripes tucked inside waist-high grassland, occasionally making some movements.

That’s certainly not what I had travelled all the way from Australia to Ranthambore National Park in Rajasthan, India (where the chances of sighting the predators are said to be pretty high) for.

Of course, if you’re keen on wildlife safaris, Africa is the Mecca.

But in Africa, it’s possible to see lots of different types of wild animals except the Royal Bengal tigers.

Tigers are an endangered species. The global population has reduced from hundreds of thousands to fewer than 2,500, mostly inhabiting the forested areas of India.

The main reason for their extinction is illegal hunting, poaching and forest destruction.

The initiatives of late Fateh Singh Rathore (former director of Ranthambore National Park) are well recognised among tiger conservationists round the world.

His work for over five decades has turned Ranthambore into India’s best tiger reserve and the tiger population in this national park is on the rise.

Safaris at Ranthambore are allowed early in the morning and late in the afternoon. And entry to the national park is highly controlled.

Entry to the park is by designated gypsies and canters provided by the state forest department.

A gypsy is an old-fashioned six-seater jeep.

A canter is an open truck that can fit around 20 people.

According to the rangers, there are 60 tigers, 50 leopards, 900 deer of different varieties and a good proportion of sloth bears, bison, monkeys, crocodiles and colourful birds currently occupying this 400 odd square kilometres of the protected sanctuary.

However, only 20% of the reserve is open to visitors.

The park is at the edge Sawai Madhopur, which is a town 130km away from Jaipur, the capital city of Rajasthan state.

The park offers rewards for those who love nature.

Backed by the rugged Aravalli cliffs, a network of lakes and ponds filled with lotus and lilies ornament the undulating grassy meadows.

The landscape of cliffs and lakes along with dry and deciduous vegetation was once the hunting ground for Rajput kings.

You can capture the park’s royal past by visiting the ruins of scattered tombs, towers and pavilions.

A massive 1000-year-old fort overlooks the landscape and blends into the austere surroundings.

Tigers can be elusive 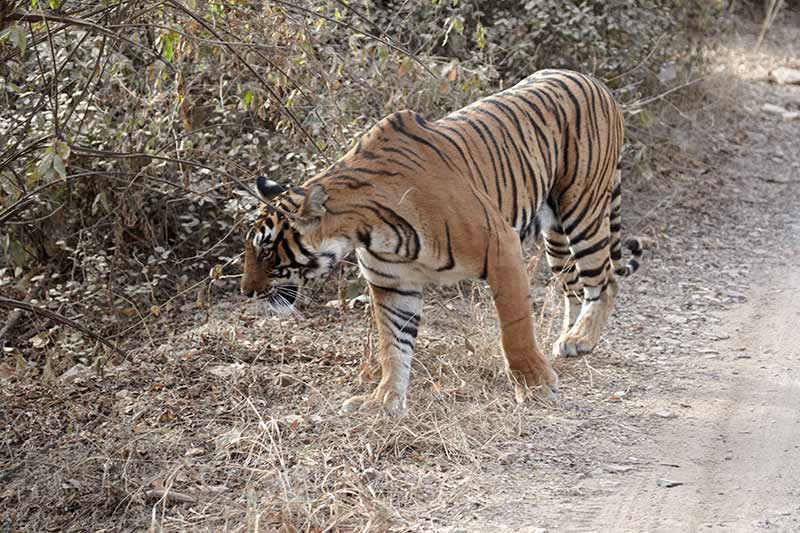 Initially, the serendipity of the wilderness and occasional sightings of wildlife, mostly deer, bison, wild boars and exotic birds like peacocks and kingfishers are absorbing.

But after a while, it becomes frustrating when the park’s most coveted inhabitant fails to reveal itself.

Girish continues to follow the scents and listens carefully to the calls from the deer for clues to locate the tigers.

That’s how we finally end up in front of this tall grassy bush, waiting patiently with hundreds of other onlookers for the two tigers to emerge from their hideout and pose for photographs.

Then suddenly a deer appears in the distance. Perhaps the smell of the deer ignites their hunger as the evasive tigers finally surge out to find where dinner is waiting.

It’s the moment that I have been waiting for.

Adrenalin courses through my body as I capture photographs of the two Royal Bengal tigers (each tiger is about one meter long) twisting and turning to loosen their muscles.

Girish identifies them as two-year-old cubs.

Their princely presence spreads a sort of joy-filled madness among the watching crowd.

Expressions like “wow”, “awesome”, “please let me see”, “move”, “don’t stand” and more can be heard from almost every vehicle.

I keep on pressing the camera shutter to capture the rapid movements of the tigers.

They seem restless, possibly frustrated not to find their prey as the deer has escaped.

Running between the vehicles, they pause to look for their prey and reposition themselves in the grasslands again.

Unfortunately, we miss the final hunt as the park is about to close. We begin our return journey raising more than three cheers for Girish.

I seem to recall a saying by an experienced traveller: “Any wildlife safari is full of unexpected experiences and uncommon rendezvous.”

While speeding back to our lodge I realise how true this statement is.

The nearest international airport is Delhi where Singapore Airlines has daily flights via Singapore. Delhi to Ranthambore is 380 km (seven hours) by road. Another option is to fly from Delhi to Jaipur with Indigo, India’s top domestic carrier. Ranthambore is 180km from Jaipur.

Khem Villas offers luxury tents, cottages and rooms in an environmentally sensitive natural surrounding that fittingly sets the mood for enjoying the wilderness.

Contact local tour operator Indian Holiday Pvt. Ltd for travel arrangements in India including safari bookings. Thinking of travelling to India? What about cruising the backwaters of Kerala or take a luxury cruise on the Brahmaputra River?

Want more? See the Currumbin Wildlife Sanctuary animals at the new Lost Valley and come face to face wtih the animals in the Daintree rainforest or devils and wombats in Tasmania.