Most of the time, Andong is a rather sleepy province in South Korea but during the festival, the whole region comes alive with pounding drums and crowds of excited people.

I attended a few events and found myself particularly mesmerised at the local shaman dances.

It started with a middle-aged woman in the centre of the floor, twirling to the drum beat.

Suddenly, she stopped swirling and began to tremble.

Her body shuddered and her head snapped back and forth to the pounding of the drums.

If you had asked me before I went, I would not have told you this was high on my bucket list but during the performance, I was transfixed. Think punk rock in multicolour! They call it the possessed shaman ritual, Kangshinmu.

This ritual is just one of the attractions at the Korean mask dance festival, known as Andong’s International Mask Dance Festival, where a 10-day celebration of dancing, games and cultural exhibitions brings the South Korean city alive.

The festival is not just for locals.

Dance troupes flock here from around the world.

They come to perform their country’s traditional dances and participate in events. Performers from around Korea entertain the crowd with traditional masked dances. In the open-air central auditorium, a masked clown bride prances demurely flirts with a masked priest.

It’s a beautiful day and the sun is shining.

From the expressions on the faces of the onlookers the crowd, this is a popular dance.

The dancers are interesting but I’m equally as captivated by the faces in the crowd. There are young women sporting large sun visors on their heads (to keep the sun’s rays off their skin) and wrinkled elderly women with folded newspapers as hats stuck on their heads.

Once upon a time, masked rituals were all about appeasing the spirits.

Over time, Andong’s masked dances have become a way for village folk to criticise the aristocracy behind the anonymity of a disguise. The festival is popular with locals and you will see groups of elderly men dressed in western suits and 50s-style hats sitting around. Giant masked characters entertain rosy-cheeked children. And the festival has art, craft and storytelling sessions for young ones.

Temples, palaces and historic buildings (such as Andong’s Dosan Seowon Confucian Academy) are worth exploring while in Andong. At the festival, there are marquees packed with food and craft stalls offering samples of local edibles such as sikhye, a sweet rice beverage, Andong soju, rice liquor listed as the province’s intangible cultural treasure number 12 and mackerel fried to a very special local recipe (also on the cultural treasure list). Mask carving in Andong is an art. It’s worth stopping at one of the stalls to watch the carvers deftly chisel a nose into an Alderwood block.

Once the face of the mask is carved, the masks are covered with thin paper made from the bark of a mulberry tree before it is lacquered and painted with natural pigments. Andong’s masks are treasured (in other parts of South Korea masks are used once then burned) and stored after each show.

The reason for this is the locals believe that masks have magical properties.

The masks reflect the emotions of the wearer.

Masks are also used in rituals to repel evil and placate the spirits.

In Andong, there are 11 traditional masks: The Yangban or aristocrat, Sonbi or scholar, the Buddhist monk Chung and Paekchong the butcher.

These masks are the most expressive due to the hinged jaws that enable a range of expressions.

The there’s the bride or Kakshi, Pune (flirtatious young woman) and Halmi (granny) masks. These three have small mouths and no nostrils while other masks are Choraengi (meddler), Imae (fool) and two lion masks.

A good place to see the original Andong masks is in the Korean National Museum in Seoul.

During the Andong festival, performances are held around town as well as in the historic Andong Hahoe village.

The village is located on the bend of the Nakdong River in Pungcheon-myeon.

It has a serene backdrop of lovely mountains and is home to around 200 families.

Most of the people who live here are part of the Ryu clan. who have lived in this village for centuries.

The traditional Korean houses in the village are picturesque.

These buildings are hundreds of years old and have been handed down from generation to generation.

Wandering around the village is like walking into a time portal.

Andong is the historical birthplace of the noble class and some people are quick to point out that Andong was the place chosen by Queen Elizabeth to visit in 1999.

But in Andong Hahoe Village, the homes of the nobles were put in the centre of the village and surrounded by houses of the peasants, which face all directions.

If you’re into lapping up local culture, you can stay with a local family at the Andong Hahoe village. But if you’re planning to visit during the festival keep in mind rooms fill up fast during festival time.

More things to do in Andong

I sit in quiet contemplation on top of the hill which overlooks the Andong Hahoe Mask Village, peering at its horseshoe shape on the bend of the Nakdong River in Pungcheon-myeon, imagining a bygone era of Confucian scholars and politicians mingling with farmers and shopkeepers. The village has been home to the Pungsan Ryu clan since the Goryo period.

In 1592, politician Ryu Seong ryong played a key role in protecting Korea during the Japanese invasion and his brother Ryu Un ryong was a prominent Confucian scholar and government official.

It is Andong’s main attraction and – as most of the locals are quick to point out – was the place chosen by Queen Elizabeth in 1999, when she wanted to visit the most Korean place in South Korea. It is this historical background that seems to be driving the Gyeongsangbuk-do province (of which Andong is a part of) to be fanatical about preserving anything historical.

Old buildings have a “National Treasure Number” and intangible things such as dances, plays and traditional games with an “Important Intangible Cultural Property Number”.

Every single building, book or monument is tagged and catalogued creating an atmosphere of a living museum. I peep curiously over high stone walls into mysterious courtyards to catch a glimpse of village life and to admire the traditional Korean houses built from weathered beams.

In ancient Confucian society, the styles and roof slant all marked the social standing of the owner of the house.

While such separatism is no longer practiced, the urge to enjoy these ancient symbols of rank has not disappeared.

Some of the 180 families that live in the village have embraced the tourist onslaught by setting up quaint home-stays and souvenir stalls.

But most are elderly and have lived in these homes for several decades; bemused by the fuss they are silent characters that hide behind the scenes of the daily play on this living stage. The larger Andong area holds the historical position as the home of the noble class and the hub of Confucianism.

Later, during the Joseon Dynasty (AD1392 – 1910), scholars from all over the country gathered here to exchange ideas.

With a current population of around 180,000 in an area of 1,519 sq km, the Andong area is Korea’s widest city surrounded by areas of lush green mountains, lakes and bridges. Intermingled among the ancient treasures of the Andong Hahoe Village, a few new houses are in the process of being built according to their heritage building code.

There is a lively real-estate market where land changes hands and brand new homes are built by Koreans that are keen on owning property in a location of such historical significance.

Many Ryu family descendents, however, still live in the original homes refusing to sell up, preferring to hold on to their own personal piece of history. Another main sight is the Dosan Confucian Academy which was a place where the educated rubbed shoulders with each other and peasants longed to be part of the noble set; where Lee Hwang, Korea’s most well known Confucian scholar, taught and practiced Korean Confucianism. I stayed in a traditional Korean house in Jirye Artists’ Colony, which is about a 50-minute drive from the city.

The accommodation is not luxurious but the experience is authentic and local. I slept on a padded mat laid out on a heated floor.

The doors of the 350-year-old house creaked and groaned each time I ventured out to my western-style bathroom, which I had to walk out and around the front verandah to get to.

The setting was lovely and peaceful. It was a traditional scene straight out of the pages of a Korean history book.

Houses were arranged around a central courtyard.

The colony is tucked away in the mountains and surrounded by a thick forest. It’s a place I often reflect back to when thinking about my travels over the years.

In 1990, when the construction of a reservoir threatened to submerge Kim’s village which was then located by the banks for the Yesu River, 200 meters below its current location, Kim resigned from his Professorial role at Andong University and undertook the five-year struggle to move the entire village.

The traditional 17th-century wooden houses were dismantled, moved and rebuilt – without using nails or screws – to their current position, nestled in the mountain high above the water line. For Kim, it has been worth the struggle as Jirye is now recognized as one of the few places where people can escape from the onslaught of rapid development and totally envelop themselves in the trappings of traditional Korean culture.

“The people that come back treat this as their home, rather than a hotel,” says Kim proudly. It started as a place for artists and poets to enjoy the fresh mountain air but these days his family village plays host to successful business people from South Korea’s busiest cities, as well as foreign scholars and dignitaries including a visit from Korea’s French Ambassador.

The colony receives most of its international visitors from Japan and surprisingly, a large number of visitors from Bangladesh and the Middle East.

Many are keen to witness the Confucian ancestor worshipping ceremonies conducted by Kim’s family during certain times of the year. After breakfast, we walk through the forest to his favourite spot, high up above the village to admire the view that has inspired much of his prose. 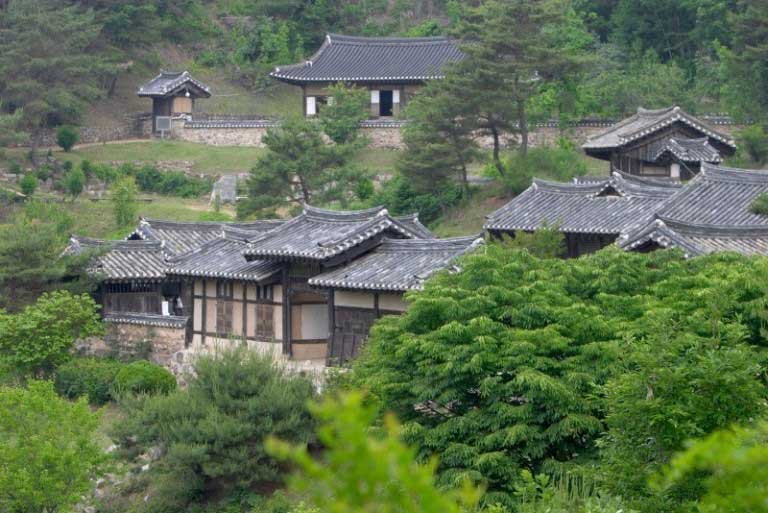