Walking through Macao’s European-style squares and passing the beautiful churches and intriguing Macau museums, you can almost believe you’re exploring a city in Europe. It’s not surprising, as many of the heritage attractions in Macau were built by the Portuguese. Here are eight ways to soak up Macao’s European charm. 1- Explore the streets of Macao

A large part of old Macao was declared a UNESCO World Heritage Site in 2005.

Senado Square, with its distinctive paving, has been the epicentre of the former colony since the 17th century.

You can’t miss the train of people heading from here up the narrow cobbled streets to the iconic ruins of St Paul’s. Only the façade of the 17th-century church survives today.

Step into St Dominic’s or St Lawrence’s churches and soak up the meditative architecture.

Wander the streets to discover charming piazzas and colourful back lanes looking out for street signs in Portuguese. Don’t miss the Taipa Houses Museum on Taipa Island for an insight into how people lived in colonial times.

Who needs to travel all the way to Paris when you’ve got a pint-sized Eiffel Tower in Macao?

This is the city of illusions, and Macau is where many movies were filmed. You can dream away as you ascend the half-scale replica of the famous tower at the Parisian Macao complex. There’s a viewing platform on the seventh floor but it’s better fun to shoot all the way to the 37th top floor.

If you’re feeling peckish, visit the elegant La Chine restaurant on the sixth floor for a French twist on Chinese classics. 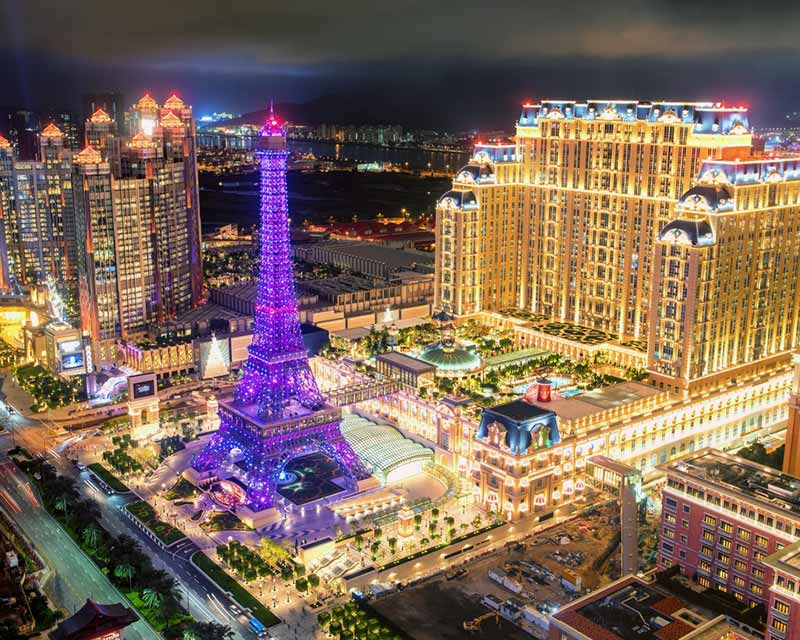 At night the tower looks magnificent as its lights up and the Cotai strip comes alive below.

You can taste all the classics at Antonio’s in the Old Taipa village – maybe bacalhau (salted codfish), grilled sardines or duck rice.

The chef, Antonio Coelho, is a colourful character and you might spot him opening a wine bottle by slicing off the top with an old sword – quite a sight. He’s a big supporter of the area’s revival.

Other old-school restaurants with a Mediterranean feel include A Petisqueira, Café Litoral and Restaurante Espaco Lisboa. Portuguese wine is great value – try a vinho verde or a Douro red.

Macao even has its own cuisine – Macanese food (a mix of Portuguese colonial ingredients and Chinese food). Try African chicken, arroz gordo or pork chop buns.

Yes, the coffee is good in Macao. The locals like Italian-style espresso and there are some great cafes to try.

If you’re pottering around the European-style St Augustine’s Square, take a break at the trendy Terra coffee house and bar.

On Coloane Island, try Hon Kee Coffee (Estrada de Lai Chi Vun) down by the shipyards where they grind and brew their own coffee.

Did you know that Macao was the first and final European colony in China?

Learn the fascinating story of how the Portuguese sailed to Macao at the Maritime Museum (1 Largo do Pagode da Barra, Macao).

The first explorers landed in 1553 and by 1557 they had established a foothold at the mouth of the Pearl River estuary.

See mini replicas of the various ships and find out about the famous navigators.

Lord Stow’s on Coloane Island (1 Rua do Tassara) is still THE place to go for Macao’s famous egg tarts though there’s competition from Café e Nata in old Macao. But be prepared to queue in both places.

As the legend goes, these little morsels of heaven were invented by Andrew Stow in the 1980s.

The original bakery is in Coloane but there are other outlets at the Venetian and on Taipa. Check out the new Stow garden café behind the original bakery. Margaret’s Café e Nata near the Sintra Hotel is pretty good too. It’s fun to explore the fantasy worlds of Cotai. For a romantic break (and some impressive selfie-shots), visit “Little Italy” by hopping on a gondola at the Venetian for a 20-minute ride.

You’ll be serenaded by a gondolier dressed in the appropriately stripped shirt and straw hat.

Choose from three canal trips and you’ll be amazed as you as you drift under Venetian-style bridges and pass replicas of whole streets.

You can opt for outdoor (depending on weather) or indoor rides. An unforgettable experience in one of the biggest casinos in the world.

For more Italian, try these Italian restaurants in Macau.

Visitors sometimes forget that Macao has a greener, more natural side. Take a break from the city with a trip to a “Mediterranean” Hac Sa Beach on the south side of Coloane Island.

Indulge in a good Portuguese seafood lunch at the Miramar with its lovely outdoor terrace overlooking the beach.

Book ahead as this is very popular at weekends.

Locals also like to hang out at Cheoc Van pool and the beach here is cleaner than Hac Sa.