Peggy’s Cove is one of the most photographed places in Atlantic Canada. Less than an hour from Halifax and blessed with a picture perfect tiny working harbour, this pictresque spot is calendar bait.

Being such a picturesque spot makes Peggy’s Cove one of the top places to visit in Canada.

Every day busloads (and many more private cars) of tourists clamber over the granite rocks, pose for the perfect shot next to the lighthouse, scour the art galleries and queue for an ice-cream at Dee Dees.

All great – but from 5pm to 10am Peggy’s Cove is not only at its most beautiful, it’s deserted.

Things to do in Peggy’s Cove

1- Watch the sunset from the Peggy’s point lighthouse

Watching the sunset from the Peggy’s Cove lighthouse is a clichéd must do but according to locals it’s a hot spot for proposals.

You’ll have your choice of where to stand or sit but be careful, the area isn’t fenced and the sea is unforgiving and unpredictable.

Behold the sign that says stay off black coloured rocks. Peggy’s point lighthouse is one of the most recognisable landmarks in Canada.

There are plenty of flat-topped rocks to balance a glass of something festive.

2- Talk to the locals at Peggy’s Cove

As a major fishing village of Nova Scotia, most of the 120 residents go back several generations.

They all have stories and are super friendly.

Don’t miss hanging out with Roger Crooks in his quirky shop – The Buoy Shack.

Retired from fishing and just shy of 90 (but ever so spritely) Roger collects, restores and paints seafaring memorabilia – buoys, nets, lobster traps and there’s even the jaw of a fin whale.

Expect a hug and you’ll be in good company – he hugged Pierce Bronson when he visited Peggy’s.

On the boats and in the wooden shacks you’ll also find fishers happy to tell a yarn as they tend their nets and buoys or see them bringing in a catch.

There’s a definite art to eating a whole boiled lobster – I think it’s all in the twisting motion of pulling it apart.

Eating lobster at Peggy’s is a ‘when in Rome’ moment.

The Sou Wester at the lighthouse is the only dinner option in the cove and has all the usual lobster and chowder dishes.

Five minutes drive from Peggy’s is Rhubarb – a fav with locals.

And if you want an authentic ‘on the side of the road’ straight up lobster no frills (except the delicious drawn butter), Ryer’s shack is also a short drive (unfortunately they only serve until 5:00pm).

If the moon and stars align, you might catch up with Captain Peter on one of his Peggy’s Cove Boat Tours, dinner cruises where not only is the lobster cooked right in front of you – you get to join in.

4- Sleep listening to the sea at Peggy’s Cove

There are a few accommodation places in the area but you want to be right in the village – so Peggy’s Cove Bed and Breakfast is the go.

Overlooking the harbour Judy and Dan Cotterell have you sorted for everything including fast wifi connection and a scrummy home cooked local fare breakfast that will easily see you through until dinner.

The four rooms at the back have amazing views (complete with balconies) and there’s no extra charge for Dan’s dry jokes.

5- Go for an early morning walk around Peggys Cove

Still water and pink light is worth getting up for.

If you’re early enough you might even catch the boats heading out.

Away from the harbour, the laneway next to the church is a beautiful walk and of course there’s all the pathways meandering between the granite rocks.

As a bonus the sun rises in the right spot to bathe the lighthouse in ‘golden hour’ light.

Or you might be lucky and see the cove blanketed in fog. 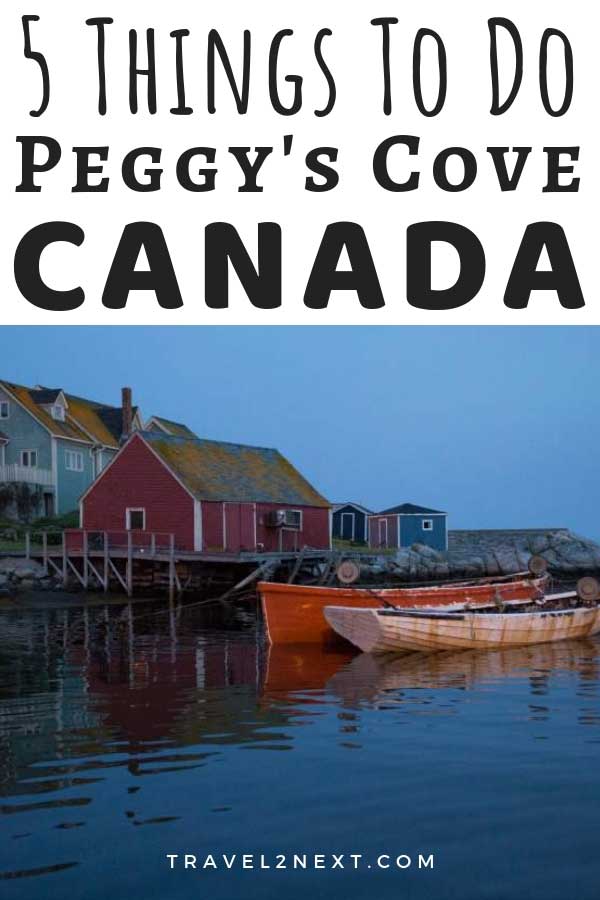