Travel2Next
Home Europe Scotland 20 Things To Do In Glasgow

Looking for the coolest city in Scotland? With galleries galore, top museums, vibrant restaurants, bars and great shopping, Glasgow is a city with a creative vibe. Whether you’re travelling solo, as a couple or with the family, here are 20 things to do in Glasgow.

20 Things To Do In Glasgow

10 Things To Do In Glasgow For Everyone

Kelvingrove Art Gallery and Museum is one of the most popular UK museums outside of London.

There are 8000 pieces on display spread over 22 themed galleries. It also has a new temporary exhibition space, lecture theatre, education rooms, restaurant and shops.

One of the key pieces is a WWII Spitfire LA198 which was flown by the 602 City of Glasgow Squadron.

The beautifully restored aircraft hangs from the ceiling of the West Court.

Other displays include a life-sized skeleton cast of a Ceratosaur, a collection of Egyptian treasures on loan from the British Museum and the controversial Dali painting Christ of St John of The Cross which – after heated public debate – was returned to Kelvingrove from the nearby St Mungo Museum of Religious Life and Art.

The value of Kelvingrove’s collection is estimated at around £600 million. Entry to the museum and guided tours are free.

Head for the designer boutiques in Princes Square, a beautifully converted 19th-century warehouse worth walking into simply to admire its glass canopies, wrought metal balconies and wall mosaics.

Pop into the historic Willow Tea Rooms for a spot of afternoon tea among the high-backed chairs and clean lines of Glasgow’s favourite architect and designer, Charles Rennie Mackintosh.

James II granted Glasgow Green to Bishop William Turnbull and the people of Glasgow in 1450.

In those days it was used as a common ground to perform mundane tasks such as washing, bleaching linen and drying fishing nets, as well as grazing and swimming.

At the edge of the park is the city’s social history museum, People’s Palace.

Housed in an elegant 19th-century red sandstone building, the museum documents the story of the people of the city (from 1750) with three floors of paintings and photographs.

Wander next door into the Victorian glasshouse of the Winter Gardens where you can warm yourself up with a hot drink in the café among tropical plants.

Admission to both the People’s Palace and Winter Gardens is free.

Built as a result of an architectural competition run in 1971, The Burrell is nestled in the woodland setting of Pollok Estate, a 141-hectare property that was presented to the City of Glasgow as a gift by Anne Maxwell Macdonald (the 11th Baronet of Pollok).

The museum holds a vast collection of 9000 artworks that were also gifted to the City of Glasgow by avid art collectors Sir William Burrell and his wife Constance.

There’s something for every taste in this vast collection including works from ancient civilisations – such as China, Egypt, Greece and Rome – to modern sculptures by Epstein and Rodin.

Architectural items, such as medieval arches, have been cleverly integrated into the design of the building. Admission to The Burrell Collection is free.

The hop-on-hop-off bus also begins its run at George Square and the pre-recorded commentary begins by providing interesting historical snippets about the stately statues in the square.

Charles Rennie Mackintosh is to Glasgow as Gaudi is to Barcelona.

The legacy of this world-renown Glasgow architect, designer and artist can be admired in the architecture and interior designs of many of Glasgow’s buildings.

The cost of the ticket is £12 and it includes unlimited travel on public transport.

Soak in the vibrant atmosphere created by restaurants, bars and street musicians in the West End after dark.

Set in a converted church, their theatre programme – which is known as A Play, A Pie and A Pint – attracts the city’s best writers and actors.

When the regeneration of Glasgow Harbour is complete, the area promises to become an attraction that pays testimony to the city’s past as one of the UK’s major shipbuilding centres.

During the 19th century, the Clyde River was one of Britain’s most prominent shipbuilding rivers and the term “Clydebuilt” was an industry benchmark for superior quality.

Today, the Glenlee (better known as The Tall Ship at Glasgow Harbour) is a precious historical reminder of Glasgow’s glorious shipbuilding past and is only one of five “Clydebuilt” ships in the world that remain afloat.

While the Hunterian Art Gallery displays artworks from well-known masters such as Rembrandt and Rodin, it’s most famous for its substantial collection of paintings by American-born James McNeill Whistler who lived and worked in Britain and France. Admission to the art gallery is free.

The centre also contains Scotland’s only IMAX theatre and the Scottish Power Planetarium where a Carl Zeiss Starmaster projector provides the opportunity to investigate the mysteries of space beneath the planetarium’s dome.

10 Things To Do In Glasgow With Kids

Looking for the best entertainment and activities in Scotland for families? Glasgow has everything you need for a fun-filled day out that is bound to leave your little ones excited and inspired.

11- Visit the Farm at Tollcross Park

Tollcross Park is a garden filled with hidden gems and areas to explore, making it perfect for a family afternoon out.

The park was developed in 1897 in celebration of Queen Victoria’s diamond jubilee.

Internationally famous for its rose garden and winter gardens, the park also features a children’s farm and the Glen Nature Walk.

The children’s farm is home to many different animals including Shetland ponies and Shire horses, and even Highland cows.

The Riverside Museum is an award-winning transportation museum housing over 3000 exhibits.

The museum isn’t just limited to typical modes of transportation but it has collections of skateboards, transportation-themed paintings and even a Stormtrooper.

Interactive displays allow kids to get hands-on experiences, and trains, trams and busses are available to board allow ing kids to step back in time.

A highlight of this museum for kids is the interactive fire engine, which allows for an imaginative and fun-filled experience. The museum is free to enter.

For a more unusual day out, head to Tennents Training Academy to take part in a ‘Bring The Wee One’ cookery class.

The training academy offers a wide variety of professional and leisure courses, however,

their children’s courses offer something a little different. With a range of classes to choose from including BBQ Masterclasses and Burger Bonanza’s, working as a team with little ones will fill your afternoon with fun and creativity.

The academy’s accessible teaching method is perfect to encourage kids to get into cookery.

The academies ‘Bring The Wee One’ cooking classes offer a free child place for every paying adult.

Take a break from sightseeing with a stop at the UK’s largest urban pancake house, Stack and Still.

Stack and Still boasts an impressive collection of signature pancakes, as well as a customisable menu that offers nearly 12 million different combinations.

A smaller children menu is available which offers some childhood favourite toppings.

With both sweet and savoury toppings on the menu, there is something for all the family at Stack and Still.

The restaurant is both kid and dog friendly, although sadly the pancakes are not suitable for dogs. To make things even sweeter, kids under 10 eat free.

Founded in 1981, the Scottish Mask & Puppet Centre is a theatre, museum and education institute to educate and entertain families through puppets.

The real lure of the centre for families is its hands-on workshops and creative spaces where kids can get stuck into mask and puppet making.

The Training Workshop is the perfect place to start; kids have the opportunity to make paper and felt masks, giant carnival heads and even take part in Japanese Noh mask carving.

16- Get Active At Glasgow Climbing Centre

A perfect afternoon out for thrill-seeking families is the Glasgow Climbing Centre.

You don’t need to be a seasoned climber to enjoy an afternoon here, as the centre provides training courses for all ages.

For those visiting the city, the centre offers taster sessions for families who would like to try climbing for the first time.

The centre also runs several holiday activities which run every weekend and throughout school holidays for thrill-seeking kids.

The Day Camp offers four hours of activity, lunch included and allows kids to complete their exciting day with an abseil out of their spire.

17- Get Creative At The Lighthouse

The Lighthouse is the name given to Scotland’s Centre for Design and Architecture, thanks to its tall tower overlooking the city.

The Lighthouse promotes the creative arts and provides the city with a place to showcase exhibitions.

The Lighthouse was formerly the offices of the Glasgow Herald and was the first public piece commissioned by Charles Rennie Mackintosh.

The centre itself is packed with exhibitions which are updated regularly.

The Mackintosh Tower features a helical staircase leading to the viewing platform with impressive views over Glasgow.

The Lighthouse is a must for creative kids.

Pollock Country Park is the largest and only country park within Glasgow.

The park is home to the famous Burrell Collection, a specialist museum of art and artefacts.

At the centre of the park is the grand Pollock House, now run by the National Trust for Scotland.

Aside from the leafy trails to explore, artworks and impressive architecture, the parks biggest lure is the animals it is home too; a fold of Highland Cattle.

Bring a picnic and take in all that this peaceful corner of Glasgow has to offer.

Designed by Charles Rennie Mackintosh, the Scotland Street School Museum was a school until its closure in 1979.

Since then, the museum shares Scotland’s history of education and features a room dedicated to Mackintosh’s designs for the school.

Kids visiting the museum can find out what life was like for schoolchildren during the reign of Queen Victoria, how they coped during World War 2, and even take part in classes in one of three interactive classrooms.

Costumes are available to dress up throughout the museum to bring your experience to life.

20- Spend the Day At Soar At Braehead

For an action-packed family day, head to Soar at Braehead.

The indoor entertainment destination has something for everyone, from a climbing centre and adventure golf to an ice bar and indoor snow sports resort, Snow Factor.

Snow Factor has the UK’s longest real show slope in the UK and is perfect for kids to practice sledging, skiing and snowboarding, or for the more adventurous; ice climbing.

After an adventurous day, head to one of Soar’s many restaurants for a bite to eat to round your day off.

Where to stay in Glasgow

Stay at Hotel du Vin & Bistro, which has beautifully appointed luxurious rooms, an impressive Scotch Whisky room and a bistro that’s the buzz of the town.

Looking for more places to visit while in Scotland? Have you been to Stirling? It’s the gateway to the Scottish Highlands. Here’s a great guide to Stirling. Also read: 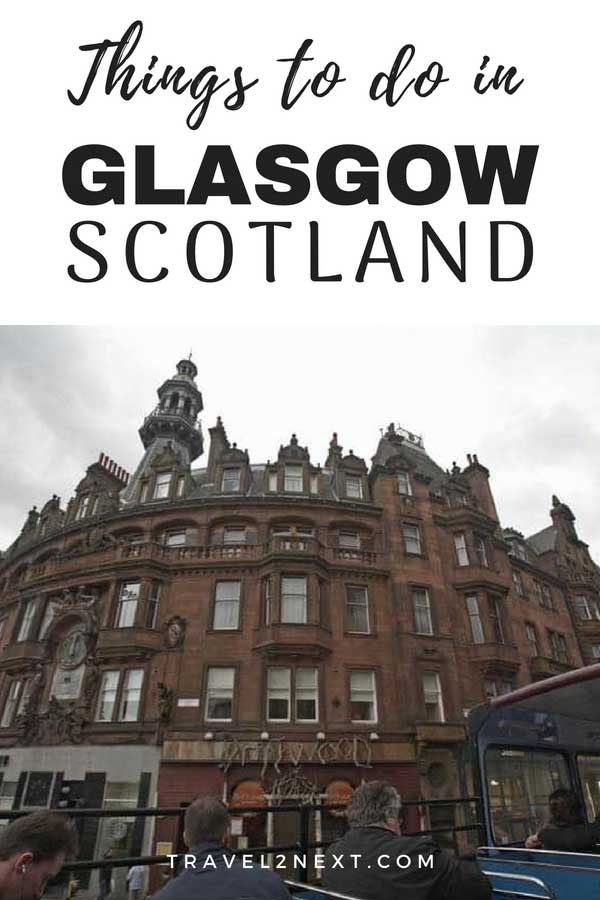