Travel2Next
Home Destinations Europe 15 Fabulous Things To Do In Lyon

Thousands of years of architectural expansion has left France’s third-largest city with a legacy of cobblestone streets, cathedrals and museums. It’s not surprising there are so many interesting things to do in Lyon for history lovers.

Located at the intersection fo the Rhône and Saône rivers, Lyon is a fine French city at the foot of Fourvière and Croix Rousse hills. Wandering around the UNESCO World Heritage city, you can’t help thinking that you could be strolling through the pages of a picture-book.

Lyon is not just a treasure trove of historic gems; there are plenty of gastronomic pleasures to experience here too. These things to do in Lyon will have you salivating for more.

1- Dine in a Michelin Star restaurant

Lyon’s treasure chest of historic gems makes it a destination worth including on any European itinerary.

Oh yes, Lyon is undoubtedly a destination for foodies.

There are 20 Lyon restaurants with Michelin stars and the city is home to France’s king of cuisine, Paul Bocuse, whose influence is everywhere in Lyon.

The brasseries reflect regional cooking: L’Est is influenced by Alsace cuisine, Le Nord leans towards Lyonnaise and L’Ouest is a nod to Asia.

At Le Sud, Mediterranean and North African dishes such as lasagne, couscous and tagines are on the menu.

2- Get inspired to cook at Institut Paul Bocuse

Aspiring chefs from around the world are taught Bocuse’s techniques at Institut Paul Bocuse.

Le Royal has a cosy ambience of a grand family mansion, with rooms decorated in red or blue themes and ornamented wall hangings and trinkets.

Staying there feels like you’re visiting the home of a wealthy uncle.

At Le Royal’s restaurant, take a seat at the long dining table in the centre of the room and feast on foie gras, boeuf bourguignon and pain perdu, the local version of French toast.

The table has a view of an area designed to look like a family kitchen in a luxury mansion.

Another delightful dining experience is at the institute’s Saisons Teaching Restaurant, where a three-course menu is prepared and served by students at the institute, which occupies a handsome 19th-century chateau.

Dishes are works of art delivered with faultless service in a grand chandeliered dining room.

Saisons is a popular local haunt and the room is buzzing with well-dressed locals lingering over a long lunch.

You’ll soon see why – the market is filled with stalls selling sausages, oysters, chocolate and cheese.

The servings are large enough to feed a whole family and the staff are friendly.

Tripe and blood sausages may not be your idea of a perfect meal but you should try it – as Lyon’s chefs seem to have perfected the art of preparing tasty sausages.

Soak in the fairytale atmosphere of Lyon’s old town while wandering around the cobblestone streets.

Vieux Lyon is one of Europe’s largest Renaissance quarters with Gothic churches, narrow lanes, museums and over 300 Renaissance mansions.

Lyon is a city made for wandering around on foot but if you prefer to get your bearings by joining a tour, book some of these tours.

One of the top things to do in Lyon is to take the funicular from Vieux Lyon to the 19th century Basilique Notre-Dame de Fourviere.

From Fourvière Hill, the terrace beside the cathedral offers a panoramic view of Lyon.

The Romans chose Fourvière Hill to build Lyon in 43 BC but the cathedral was constructed much later, in 1872.

This basilica has stunning stained-glass windows, a beautifully restored organ that dates back to 1896, lovely mosaics depicting events from the Bible and is a reminder of Lyon’s important role in Roman France.

One of the iconic statues in Notre Dame is Joseph-Hugues Fabisch’s statue of “Saint Joseph and Child”.

6- Learn about silk at the Museum of Textiles

Lyon became France’s capital of silk weaving when Francis I granted the city a silk trade monopoly in 1536.

Visit the Museum of Textiles and Decorative Arts (www.musee-des-tissus.com) to delve into the history of silk weaving.

There are displays of tapestries, textiles, carpets, cabinets of 18th to 20th century Lyon silk and patterns for Lyon-made fabrics created for the royal courts of Europe.

One of the fun Lyon attractions to discover are the traboules, or passageways, that thread their way through the slopes of Croix Rousse.

Croix-Rousse is the district where the canuts, or silk-workers, lived and worked during Lyon’s silk-making heyday.

In the 19th century, there were 100,000 silk looms operating in Lyon. See weaving demonstrations at Maison des Canuts or join a two-hour guided walking tour exploring the traboules.

Apart from Berlin, Lyon is one of the best cities to see murals, such as the spectacular Fresque des canuts (silk-workers’ mural) in Croix Rousse and Fresque des Lyonnais, which is an intriguing mosaic of Lyon’s famous residents throughout the centuries.

La Fresque des Lyonnais is a stunning mural of Lyon’s famous figures from Roman emperor Claudius, who was born when Lyon was a Roman city called Lugdunum in Gaul, to the inventor of the Jacquard loom, Joseph-Marie Jacquard and chef Paul Bocuse.

Lyon is the birthplace of Guignol, a witty marionette that has entertained French families since the 19th century.

Watch the Lyonnais version of Punch and Judy at Theatre Le Guignol de Lyon, visit the Museum of Animated Puppets and the International Puppet Museum in the old town.

10- Have Fun on a Gyroprode Segway Tour

Lyon’s Gyroprode Segway Tour is a fun way to see the famous sights of Lyon and a good option when the weather is fine.

If you’re an outdoorsy person who is keen on seeing a number of sights, this is an activity you’ll love.

Tours are conducted by local guides, usually based on a theme, stopping at Lyon’s historic districts, including Vieux-Lyon and spots along the Rhone River.

Located in a 17th-century abbey,  Musée Des Beaux-Arts is an impressive art and culture museum that has been operating as one since the 19th century.

The museum’s 70 rooms are packed with art (from medieval to modern), sculpture and other artifacts.

Not far from the basilica is a Roman amphitheatre built 2,000 years ago, steeped in history with lovely views of the city.

In the summertime, Lyon’s most famous amphitheatre has a programme of music, theatre and dance.

Not everything in Lyon is focused on the past.

You’ll be pleasantly surprised at the stainless steel and glass form of the Musée des Confluences, which is a museum that focuses on science and technology.

Displays at the museum address many of the main issues that affect the world around us.

This is an essential step in Lyon’s cultural landscape. It has lots of surprises in store for us and is an opportunity to travel and grow.

If you’re visiting Lyon with kids, the museum is a good place to spend a bit of time.

The museum is at the confluence of the Rhône River and Saône River.

14- Watch an Opera at the Lyon Opera House

Lyon is a city of culture, ballet, music and it should come as no surprise that the city has an opera house that is the envy of many European cities.

Opéra National de Lyon is in a handsome building built in 1831 that was renovated in 1993 to incorporate contemporary architecture in its design.

With a cylindrical glass roof that is a red beacon at night and seating for 1,100  in the main hall.

As Lyon is a river city, a leisurely cruise on the Rhône and Saône will give you a different perspective of this 2000-year-old city.

There are lunch, dinner, general sightseeing cruises and night cruises (which are especially enchanting during the Festival of Lights).

How to get to Lyon

Travel to Lyon on the TGV, which departs daily from Gare de Lyon in Paris. The train journey takes two hours.

A Lyon City Card provides unlimited rides on buses, trams, the Metro and funicular as well as Rhône Express train transfers between the airport and the city.

The card also provides entry to most museums and includes a cruise on the Saone, a Guignol puppet show and shopping discounts.

Where to stay in Lyon

Le Royal Lyon has excellent food and is conveniently located on a corner opposite Lyon’s main square.

The cosy decor has a warm feel and the hotel was the first hotel to have an electric lift in Lyon. 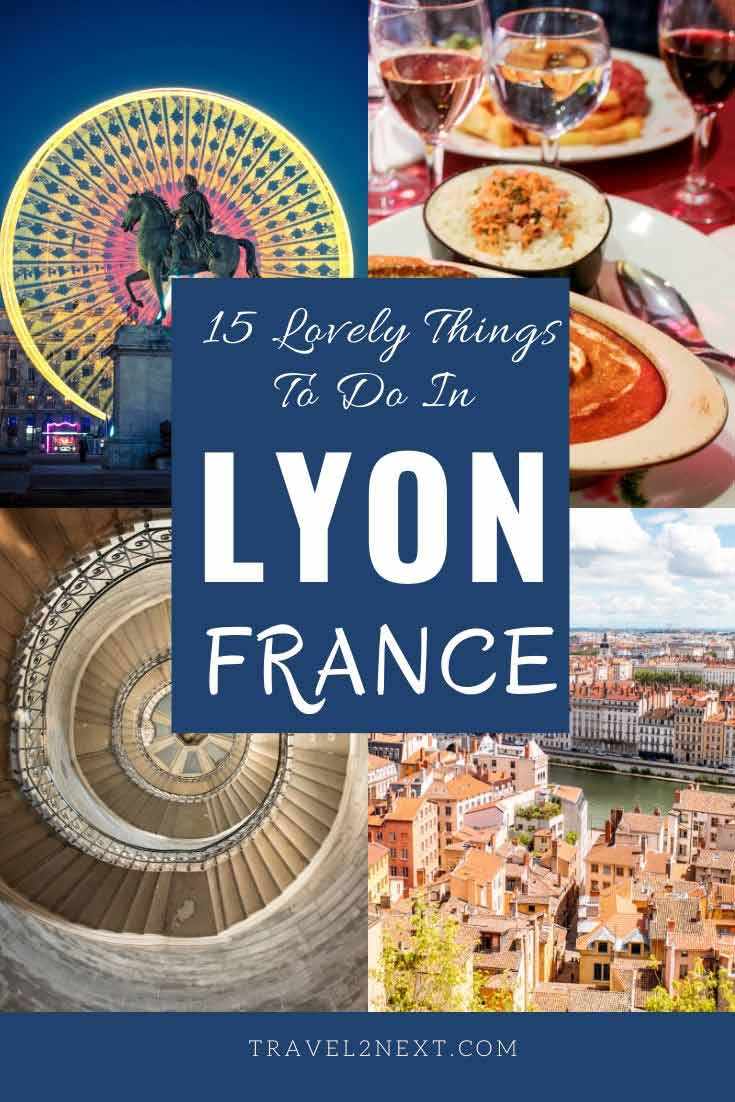