Spain’s southern coast is sunny 300 days of the year so it’s not surprising Andalucia is a popular destination. An Andalucia road trip is a fun way to explore the region from coast to coast, whether by car, motorbike or in a van.

One of the things to love about Andalucia is you can easily switch from swimsuit to hiking boots. Andalucia is also home to a number of spectacular Spain landmarks. The weather is fantastic and there are amazing landscapes.

One of the famous Spanish travel quotes says that “Every adventure starts with a yes” and a big yes is my vote for a journey around Andalucia.

One of the things I love about an Andalucia road trip is the diversity of landscapes and temperatures, from the scorching heat of Sevilla (over 40°C in summer) to hiking the Sierra Nevada in the snow even in late May.

The locals are so pleased to speak with you and offer a smile along the way.

Away from the coast, the landscape reveals a more rural side of Spain as you reach Sevilla, Granada and Cordoba.

Driving the roads in Andalucia is easy, even if you’re not an expert, and thanks to the long summer and lovely spring seasons, a road trip through Andalucia is a joy.

Sandwiched between Africa and Europe and where the Mediterranean meets the Atlantic, Andalucia occupies the southern end of the Iberian Peninsula and is a region rich in history.

With the Mediterranean Sea to the south, Andalucia also shares a border with Portugal to the west, the Spanish regions of Castilla-La Mancha and Extremadura (north) and Murcia (east) along with the British Overseas Territory of Gibraltar, which although is not technically part of Spain, is an essential stop on any Andalucia road trip.

How to get to Andalucia

If you’re on a budget, the best way to start your Andalucia road trip is to find a cheap flight to Malaga.

Malaga’s airport was given a facelift a few years ago and is the newest and largest hub, making it the easiest airport to source a cheap flight from just about anywhere in Europe and through the International Airport, you can fly from and to, overseas destinations.

Also, read this post to find out the best Barcelona landmarks as well as day trips from Barcelona. Here’s a useful road trip pack list of 44 things to bring on your road trip.

Malaga is a large seaside city known for its amazing beaches of the Costa del Sol and great food.

You can expect all the facilities of a big city and, as the temperature in Malaga is high all year long, make sure to pack your swimsuit and hang out at these beaches in Malaga.

A great time to visit is between March and late October when the temperature is usually warmer than 20°C.

I suggest visiting the local market for a meal. Find a nice outdoor table and order fresh seafood, that they cook instantly in front of you.

Things to do in Malaga

Check out a range of tours in Malaga here

From Malaga, make your way along the Andalucian coastline where you will pass charming towns like Torremolinos, Benalmadena, Mijas, Marbella and Puerto Banus.

In summer those places are so crowded, with plenty of tourists from everywhere, especially Puerto Banus which has a fantastic great seaside vibe and an amazing harbour.

Stop in Puerto Banus for ice cream at the sunset and you will be surprised at how beautiful it is.

Check out a range of tours in Puerto Banus here.

If you fancy a few days of sun and sand, relaxing on the beach, there are plenty of hotels, resorts and apartments in Puerto Banus to suit a range of budgets.

An Andalucia road trip offers the best of both worlds and the chance to explore places along the coast as well as inland.

The best coastal cities to stop at on your Andalucia road trip are Malaga, Gibraltar, Cadiz and Tarifa.

Continuing your itinerary along the coast that is separated from the African continent by the Straits of Gibraltar, you will pass through Gibraltar.

Gibraltar is a self-governing state with its own political system, however, it’s a British Overseas Territory under the jurisdiction of the United Kingdom since the first defence of Europe against the Moors.

Because of its strategic position, Gibraltar played a huge part in World War II as a military base, which gave the Allies control in the region.

Although Gibraltar is located on the Iberian Peninsula, it’s not part of Spain, but it’s a perfect place to stop while on your Andalucia road trip.

Ride the cable car to the top of the Gibraltar Rock, where the views are amazing and the famous residents are the Barbary Apes.

The Barbary macaques are monkeys from North Africa but nobody knows how the came here for the first time.

The local authorities feed the apes and keep them on the top of the rock and away from the city.

To get to Gibraltar, you will need to cross the border, so don’t forget to bring your passport.

The local currency is the Gibraltar Government Sterling (although the United Kingdom sterling is commonly used and Euros are accepted).

Gibraltar also has its own airport.

Things to do in Gibraltar

Check out a range of tours and activities in Gibraltar here.

Tarifa is a great spot for watersports like kite surfing.

It’s also one of the closest points to Africa and on a clear day, you can see the coast of Africa.

Tarifa is really small and although there are many beautiful beaches, it’s not really a great place to spend time on the beach as it can get very windy.

From Gibraltar to Cadiz, it is just an hour drive.

Unlike in France or Italy, there are no fees to travel on the highways in Spain, however, the exception is between Malaga and Gibraltar as well as Cadiz and Gibraltar where a fee of 2.40 euro is required when passing from one state to another.

Cadiz is basically an island connected to the continent by a unique and pretty amazing bridge, that is busy in summer and especially on the weekends.

Cadiz is an amazing city with a small-town vibe and rich in traditions.

The landscape along the coast is amazing, especially the dome of the Cathedral, and do try to head to the seaside at the sunset for the best photos.

As Spain is famous for its food, I suggest you should also try the local cuisine and Cadiz is the place for the seafood.

It is time to leave Cadiz, a day is more than enough to enjoy the city and take a relax on the beach.

Things to do in Cadiz

Check out a range of tours in Cadiz here.

One of the things I love about Andalucia is the diversity of landscapes and temperatures, from the scorching heat of Sevilla to hiking the Sierra Nevada in the snow even in late May.

Switching the landscape to a more rural side of Spain, you will drive to Sevilla, Granada and Cordoba.

Sevilla is amazing, magical, enchanting and easily the best city we visited on our Andalucia road trip.

For me, Sevilla is the highlight of any Andalucia road trip as it’s charming and awesome at every corner.

I was inspired by the scenic photo spots, the Flamenco dancers on the streets and the amazing architecture.

Things to do in Sevilla

Check out a range of tours in Sevilla here.

Point your GPS to Granada for another amazing adventure on your Andalucia road trip.

The city on the hill with Alhambra against the white Sierra Nevada peaks is one of the most stunning landmarks in Spain.

Alhambra Palace is an impressive fortress built in the 9th century and a castle in Andalucia to tick off your bucket list.

Being in Granada, which is the most Moorish city in Andalucia, allows you to soak up North African Traditions.

I really enjoyed the food in Granada, which is also amazing everywhere in Andalucia.

Granada is also famous for the natural sources of therapeutic water.

Things to do in Granada

Check out a range of tours in Granada here.

Give yourself a relaxing day in Cordoba at one of the best spas in Europe and make sure to leave enough time to visit the best Moorish citadel in southern Spain.

While in Cordoba, plan to visit the Mezquita, which is a beautiful and famous mosque and the city’s most famous landmark.

Cordoba is also rich in Roman history and there are lots of well-preserved Roman structures that still remain, such as the bridge that connects the two sides of the city.

Things to do in Cordoba

Check out a range of tours in Cordoba here.

As you can see an Andalucia road trip is a great way to explore the region independently as there are many treasures to discover along the way.

Driving gives you the flexibility to stop whenever you want and change your plans as you go.

My advice is if you see something that grabs your attention, stop and explore as you never know when you’ll get the time to go back.

Do you need an International driver’s licence to drive in Andalucia?

Love road tripping? Here are some amazing road trips you will love 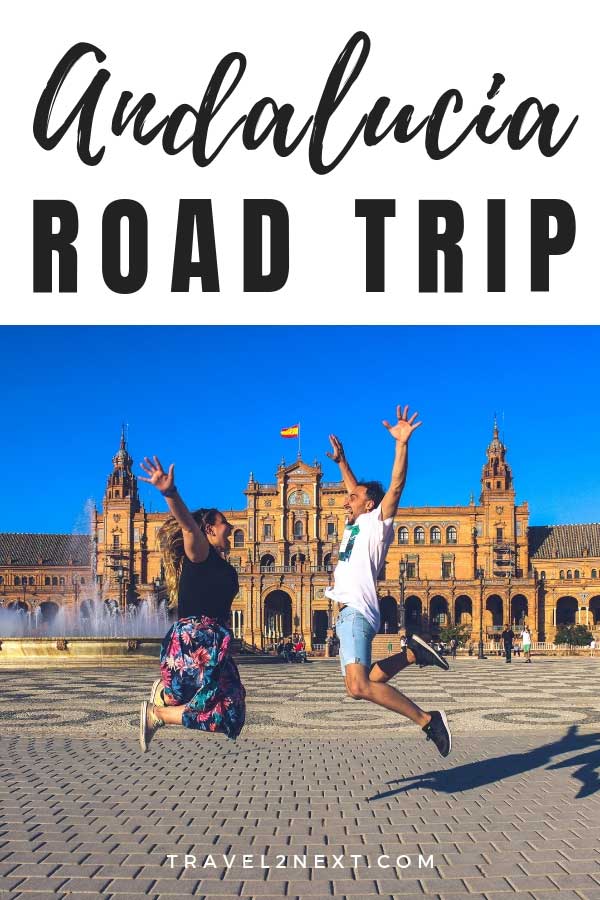